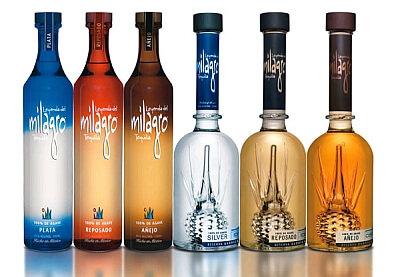 I’ve been wanting to review Milagro Tequila for a while because no matter what airport I’m flying out of in Latin America, Milagro always seems to be front and center at the duty free store. But who are these guys? You never see their bottles in a regular store in Mexico—just in the U.S.—and I don’t recall ever seeing an ad or a review in a magazine. (In all fairness, their website does link to four reviews from last year, though one of the magazines—Travel + Leisure Golf—is now kaput.)

Unfortunately, their Flash-heavy website is high on form, light on substance. I still have no idea where this tequila comes from and who is behind it. The contact page lists only a single e-mail address, with no phone number or physical location. Is Dr. No running this enterprise, or is it the front business for a drug cartel? Probably not, becaue it is distributed by William Grant & Sons, the same well-known distributor that has Glenfiddich and Hendrick’s Gin in its portfolio.

The proof is in the product though and I have to admit that from a price to payoff standpoint, this tequila is a bargain. In many duty-free stores, you can get the blanco version for 20 bucks and the reposado version for under $25. When I was in Mexico City recently they were offering a 3-for-2 special, but traveling alone I couldn’t stow that much in my luggage. I picked up some of their agave nectar instead for my wife and it was a pretty and useful gift.

I’m not going to tell you that Milagro tequila will blow you away and one sip will be a transformative experience. The reposado I bought, however, was more than good. It is good enough to sip on its own and it made a killer margarita I was happy to serve to my guests a few weeks ago. (And no, I don’t use that awful store-bought margarita mix, so you really could taste the tequila.) It’s a bit sweeter and more flowery than the norm, with a triple-distilled smoothness that would appeal to those not accustomed to drinking this spirit neat.

If you’re looking for tequila that will cover the basics for a good price, Milagro is good enough and if you are trying to grab a gift for someone, the bottle is pretty enough to make it look much more expensive than it is. For a step up in price to a C-note or so, there are versions that are truly impressive from a visual standpoint (second set in the photo above), but again at about half the price of competitors’ most showy versions. In my opinion you have to have a really sensitive and experienced palate to tell the difference between a $50 tequila bottle and a $250 tequila bottle anyway. Extensive aging doesn’t help tequila, so after a certain point it’s more about the bottle than what’s inside. Unless you’re buying for a true conneisseur, Milagro is a good bet.