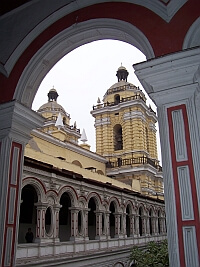 You don’t read a whole lot about Lima, Peru in the travel press and historically there’s been a good reason for that: most people don’t stick around. Despite the Peruvian government’s not-so-subtle efforts to make every tourist pass through the capital on the way to Cusco or elsewhere, few spend more than a night or two there on purpose.

Nicholas Gill, who has reviewed several hotels for us (including the Cliffs Preserve in Chile) thinks the city’s reputation is behind the times. His article, “Lima on the Upswing” is in the September issue of National Geographic Traveler. See the online version here.

I personally think more effort is required to help the historic center reach its potential. Witness the major turnaround in Quito over the past five years and the one going on right now in a big way in Mexico City. Lima needs that kind of ambition to change travelers’ perceptions.

But it gets better all the time and I could easily spend a few days eating and drinking my way around Miraflores, where I spent a couple nights in December at the Casa Andina Private Collection hotel there, near all the action.

One’s thing’s for sure: Lima has some fantastic restaurants. Peruvian food is finally getting its due, but they’ve been making great meals here for a long time. I had some of the best ceviche ever last time I was there and pretty much every meal was a treat. (The wine still needs some work though.)

See our Luxury Hotels in Peru section for the best places to spend the night in Lima. Unfortunately, there are no luxury hotels in the center…yet. The Sheraton there is nice enough and the rooms are excellent, but it’s a big hulking convention hotel and casino.