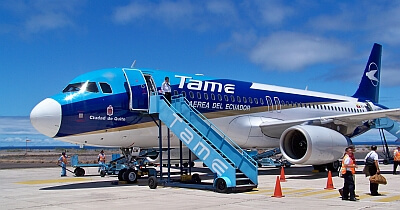 Things didn’t start off so well on my first Tame flight from Quito to the Galapagos Islands. The departures screen announced “last call” and “departed” before we even were called to board. The screen said we were stopping in Guayaquil for more passengers, but actually the plane went direct to the islands. We were all confused, but happy in the end.

Things went smoothly in the air on our big Airbus plane. The food was a bit odd both ways, including cold chicken nuggets (see photo below), but at least there was some food—more than you can say on many domestic flights anywhere these days. The staff was friendly and came around with a good drink selection, including complimentary beer and wine. Announcements were in English and Spanish and parts of the inflight magazine were in both languages as well.

There were only six business class seats and only two of those looked to be sold on either flight leg. I didn’t get a peek at what they were eating, but did hear the clang of real cutlery. Seat set-ups were standard biz class: four across instead of six, but seat pitch is underwhelming. (It’s not listed online at the usual sites.)

Tame—pronounced tah-may—flies to a variety of domestic destinations and has international routes to Colombia, Brazil, and the Dominican Republic.

Their Distancia frequent flyer program has partnerships with TACA, Iberia, and United, so you can get mileage on one of those for your Tame flights. Or book a free ticket on Tame with miles from United—in theory anyway.

If you’ve ever thought about retiring abroad in Latin America, here’s a big incentive from Ecuador: half-price flights for legal residents. That’s not me though, so I paid $360 round-trip in coach from Quito to Baltra Island. 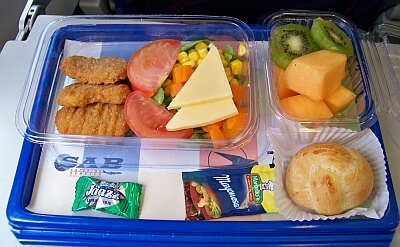