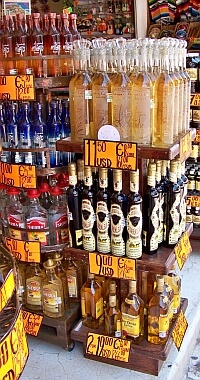 If you’ve ever spent much time browsing the tequila shelves in Mexico, you’ve no doubt run across the striking slender bottles of Tequila Corralejo. I say “ever” because this was probably the first tequila brand to really differentiate itself with unusual packaging, long before the premium tequila boom hit the U.S. and companies started putting $30 tequila in showy bottles so they could charge $200 instead.

Corralejo hasn’t gone that route though. In fact if you’re buying a bottle while on vacation in Mexico or from the duty-free shop, this brand is often the best value on the shelf. In this photo here that I shot in Playa del Carmen, a bottle of Corralejo is only 50 cents more than crappy Jose Cuervo Gold. The former is 100% agave, the latter is part agave, part whatever kind of sugar could be bought on the cheap. (The other great bargain in that photo is Milagro, which I’ve reviewed on here before.) Unfortunately, you’ll pay three times that amount pictured if you buy it in the U.S., but that’s on par with its peers.

This is a fairly complex reposada tequila, especially considering the price, with a mixture of citrus flavors, pepper, oak, and honey. It gets four months in three kinds of oak barrels—enough to smooth things out and add balance, but not as front-and-center as with añejo versions. In some shops you’ll also find a blanco and añejo in bottles with different colors, but those are less popular.

Besides the distinctive bottle, this tequila has another attribute setting it apart: it’s not made in Jalisco. That’s a rarity since nearly all the quality tequila comes from that one state. Instead this is made in the state of Guanajuato, in the town of Pénjamo. It comes with a heavy dose of history: this tequila was is distilled in a hacienda that was the birthplace of of Miguel Hidalgo y Costilla—the priest who sparked the Mexican fight for independence. You can’t get more authentically Mexican than that. Fire up the mariachi band and pour some tequila!