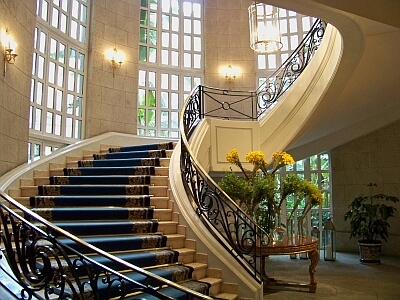 Sure, Las Alcobas is an impressive small hotel with great rooms and the ginormous St. Regis Mexico City that opened a few blocks away at the end of 2009 is at the other end of the scale with its 31-story building. Both are places we would highly recommend, so why does the Four Seasons keep attracting the billionaires. CEOs, and power brokers who can afford to stay anywhere?

Well, there’s an air of exclusivity here and a level of service that’s hard to top. The staff is used to serving rock stars, presidents, and CEOs, so the bilingual staffers know how to serve them well. Inside the fortress-like building, guests can feel ensconced in a special hideaway that’s removed from the madness outside. It’s why the restaurant is still the place to go to broker power deals or political compromises. It’s why “I’m staying at the Four Seasons” is still the choice phrase to utter if you’re trying to show potential business partners your company is a success.

I’ll be updating our review of Four Seasons Mexico City shortly and adding a couple more photos, but really there’s not a whole lot that has changed in the past few years. Very little needs to change: this is a timeless classic.

Where to Eat in Mexico City

In Bogota, You Have Two Four Seasons Hotels to Choose From
Share it!