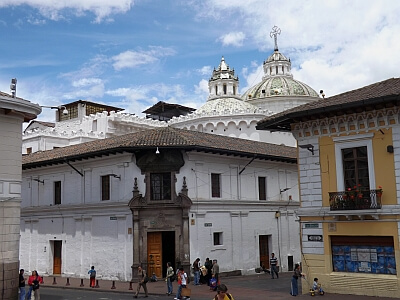 The city of Quito, Ecuador has figured into plenty of hotel reviews we’ve done and two tour stories: Quito and the High Valley and a Mainland Ecuador feature.

What if you just have one day in the city though before or after the Galapagos? What’s the best way to spend that day?

On a Quito city whirlwind overview before the TravelMart Latin America conference, I and a bunch of other journalists were out for a day with Klein Tours and Quito Tourism. If I were advising you on what to do for your one day in the old city of Quito, this would be a darn good itinerary to follow.

We started up at the Panacillo, the “Virgin of Quito” statue overlooking the historic center. Here you can see the oldest UNESCO World Heritage city (shared with Krakow) in all its sprawling glory. 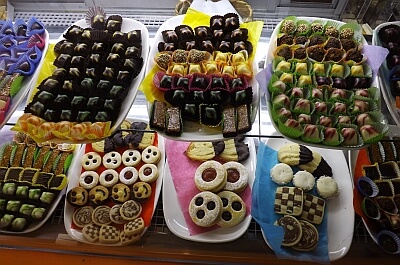 Chocolates and sweets at Chez Tiff in La Ronda, Quito

We then came down from the hill to La Ronda, the popular pedestrian street that has more to offer each time I visit. This time there were lots of artisans displaying crafts, from forging metal to woodcarving to chocolate making. Did you know that Ecuador produces 2/3 of the top grade cocoa used in the most expensive chocolates?

We ventured on to the terrific Casa del Alabado museum, where (restored) pre-Colombian art found in the region is beautifully displayed in a well-designed series of rooms. Housed in a mansion dating back several hundred years, the displays lead you through the underworld, middle world, and upper world of the leaders and shamens. It’s just the right size for an hour tour or less, not overwhelming, but impressive in each section. 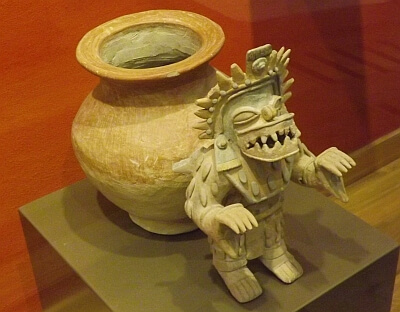 A couple blocks away is San Francisco Plaza, which changes throughout the day as the sun moves across the sky: see a photo series of that here. We ventured inside to see one of the courtyards and go upstairs to the choir loft of the church. Here there’s a Moorish ceiling of inlaid wood and a view of the gleaming main sanctuary, full of carved wood covered by gold leaf.

Hotel Plaza Grande was the spot for lunch. This vies with Gangotena as having the best restaurant in the center and although this was the third time I had eaten there, every dish was a delightful surprise. All beautifully presented and delicious, and overlooking where Ecuador’s president works and weekly speaks to the crowd assembled in Plaza Grande.

I said San Francisco church had a lot of gold leaf. But that’s got nothing on La Compania de Jesua, a Jesuit church that is one of the most glorious in Latin America, gleaming with so much gold that the whole place sparkles from every direction. With a mix of Baroque, neo-Classical and Churrigueresque elements from the 160 years it took to complete, there’s nothing understated here. Come to La Compania to be wowed.

Our last stop was the terrace of Hotel Casa Gangotena, opened a few years ago right on Plaza San Francisco. A drink and a few nibbles here, with a view of the city stretched out before us. One in our group got a shoe shine in the plaza. It was $1.

Beyond this itinerary, just take some time to wander the interesting streets of the old city of Quito. This is the largest colonial center in South America and best explored on foot. For more ideas, see the Quito Tourism site.

A Visual Guide for Things to do in Quito, Ecuador

Experiential Travel in Quito at Illa Experience Hotel
Share it!