“If you don’t like this, it’s safe to say there’s no tequila you’re going to like,” said one magazine editor to another who was skeptical about the spirit. “Oh, that’s quite good,” he replied, banishing all memories of shots with salt and lime in his college days. 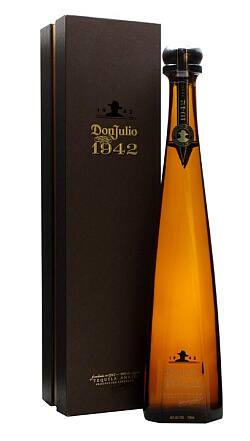 In reviewing the best go-to choice in any Mexican bar—Don Julio Tequila—I mentioned that I had not yet tried the extra premium 1942 version. That changed this week when I was at a dinner at the Rosewood Mayakoba and they pulled this out for our after-dinner drink.

You can think of this particular brand extension as leaving a fine spirit in the barrels longer to give it more influence from the oak. The 1942 line is made in small batches and aged that are aged for a minimum of two and a half years. For some people this “extra añejo” is too much of a good thing as some of the tones you associate with a good cognac or bourbon start to rise up in prominence. The nose was much more “serious” in this version and on first sip there are stronger tones of caramel and vanilla.

As it moves around your taste buds you might detect some tropical fruit tones, black pepper, some other spices. The fresh sweet agave that’s prominent in the original Don Julio recedes to the background a bit, like a rambunctious child told to sit down and stop acting up.

Just as some things in us improve with age and seriousness though, so too with 1942 when you’re looking for a good tequila to sip after dinner as we were.  Among some real enthusiasts this is one of the best on the market, something to pull out for a special occasion. It has a price to match that sentiment: listing for $140 and generally only going for $10 or $15 less in stores.

It’s not hard to find on the shelves. Unlike the normal squat bottle for the regular Don Julio versions, this one comes in a tall and skinny handcrafted bottle that really makes it stick out. Supposedly the founder of the company made his bottles short so that drinkers could see each other across the table easily, but obviously there won’t be four or five bottles of this version getting in the way!

What’s the story with that name? It happens to be the year that Don Julio González began producing tequila. The rest, as they say, is history.