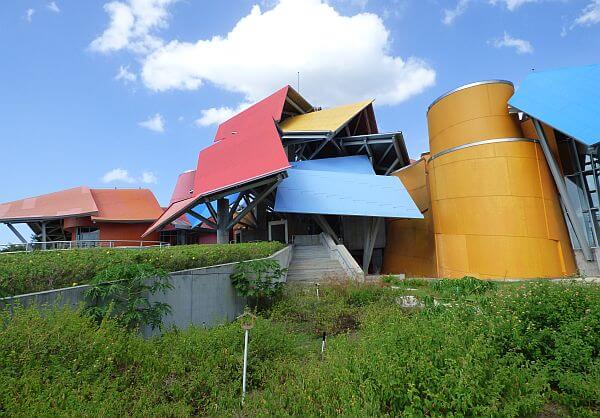 When you look at the shore excursion or day tour options on the internet for the capital of Panama, they’re quite limited. You’d be forgiven for thinking that all there is to do in Panama City is visit the canal, stop by the Gamboa Rainforest center, and have a drink or meal in the Casco Viejo old city.

Thankfully the independent travelers are hearing about and visiting the Biomuseo on the Amador Causeway. It is housed in an impressive work of artistic architecture by Frank Gehry, has helpful displays in both languages, and a presents a really well-done history of this region from its formation through the present day. There’s a great video display on multiple screens in one room and young bilingual staffers on the floor are glad to explain whatever doesn’t make sense. If you’re headed to the city, put this museum on your list, even if time is short. It’s not far from either the canal or the oldest part of the city, so you can easily combine it with either. 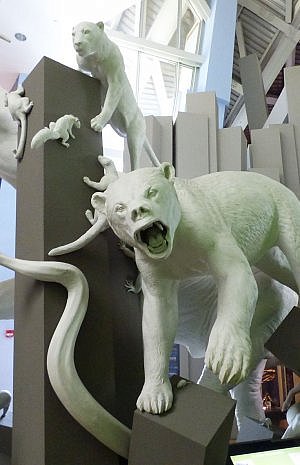 This is a rather recent addition to the city’s attractions, opened at the end of 2014. Several phases in the original design are still in motion, such as a Pacific ocean life aquarium and a Caribbean ocean life aquarium. Outside will be a biological project in the open, with walkways through live plants. The building is Frank Gehry’s only project in Latin America and it’s an impressive one. You can see it from one shore of Casco Viejo (sometimes called Casco Antiguo), the multi-colored roofs at different angles meant to symbolize the plates coming together to form the isthmus.

The museum centers around this theme of two continents coming together and changing the world. Not only did this development only a few million years ago allow animals to move between north and south America, it also changed global tidal patterns by closing off the connection between the two oceans. This set off a chain of events that led to the most recent ice age. Over time, coastlines around the world changed when the ice melted again and sea levels rose. When man moved across and down from Asia (and probably across the ocean from the South Pacific), the larger animals that could feed a whole village were wiped out by hunters with spears.

That was just the start of the changes, however. The museum highlights the animals that are now extinct, but also shows in detail which ones are extinct or in big danger right now. Then a section on Panama’s history shows how quickly the indigenous people themselves were then wiped out by diseases the Europeans brought with them. Crops changed, domestic animals joined the native ones. and the Colombus Effect began. One display shows a typical Panamanian meal and outlines how many ingredients didn’t originate here. You could do the same for Italy, Ireland, or Thailand with items they didn’t start out using either.

If you are interested in the history of the Americas and how they have had so much impact around the world, the Biomuseo of Panama does a better job of laying it all out clearly than anything I’ve seen in the past.

For ticket information, hours, and directions, see the official website.