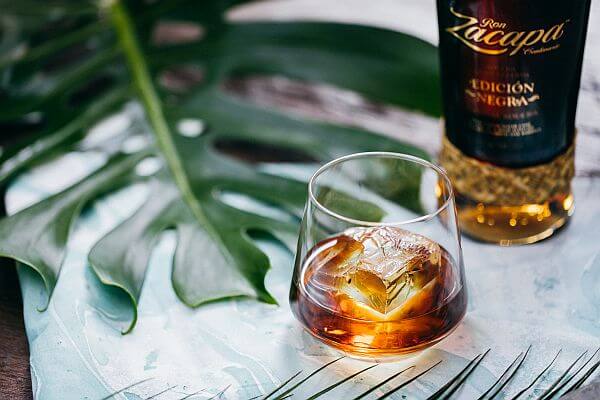 When you start asking rum connoisseurs about their favorites, the name Ron Zacapa pops up a lot, so I was excited to try this relatively new Edición Negra version. Ron Zacapa 23 is not just one of the best rums from Central America, it’s also one of the best in the world. This new one has an interesting twist though, with rum aged in charred oak barrels that previously held American whiskey and Pedro Ximénez wines from Mexico.

That combination is kind of a head-scratcher to me. I wouldn’t normally put bourbon and red wine together in the same drinking session unless it was going to be a very long night. (And maybe a rough morning.) Most whiskies that have employed this technique pick one type of barrel and run with it, like sherry or port, and find some good alchemy in the combination. The company’s own Zacapa Centenario XO is a good example for rum, with an extra aging session in barrels that previously held cognac. It works extremely well—and commands a high price.

How would this second introduction work out, with three different flavor profiles and rum versions aged anywhere from 6 to 24 years? Well if anyone could pull this challenge off, it would be master distiller Lorena Vasquez. She’s been at the controls at Zacapa (and sister label Botran) for more than two decades now, so I think she has proven she knows what she is doing. 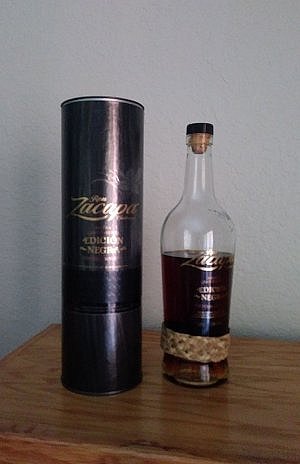 None of this information I supplied above is on the bottle, which seems rather odd to me. All it says on the label is, “From virgin sugar cane & aged at a high altitude in double charred oak barrels.” The presentation is quite understated overall, especially at the U.S. liquor store price point of $55 to $80. After you open the nice gift cylinder, the bottle is nothing special: cork and plastic top, small embossed flower, a clear glue-on label, and the woven reed decoration circling the bottom. So if you’re looking to really impress a client, spend more for the XO version instead.

If you’re buying it for yourself, it’s what’s in the bottle that really matters, right? Here the Negra shines.

My first impression was, “Wow, that’s a lot of smoke and wood,” the taste hitting me hard like a Flor de Caña rather than like the normal velvety soft explosion you get on the tongue from a Zacapa 23. It mellowed out a bit as it spent some time in the glass though and the elements came together well in a cohesive package. This is kind of a “best of both worlds” rum for people who like strong flavors but complexity. You get the usual caramel, vanilla, and spice notes you expect from a Botran or Zacapa rum, but a bit of the dark side creeping in with hints of leather, ash, and dark chocolate. 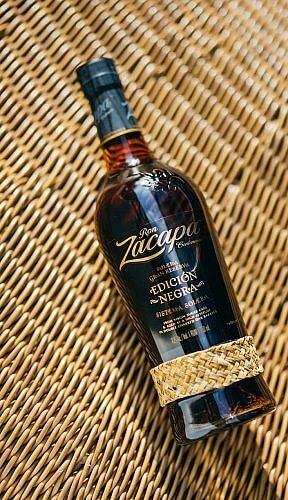 Although this rum only has 3% more alcohol than the others in their line, it smells and tastes like there’s more. The bourbon overtones are clearest in the nose, where you get a strange Guatemala meets Kentucky combo. It’s harder to find a smooth bourbon than a smooth rum, so perhaps the best contribution of the whiskey barrels is to provide a perception of heft and add another dimension to the flavor journey. This Negra rum really dances across the tongue, hitting different taste buds from the beginning of the sip until a finish that seems to linger forever.

I didn’t get any hints of red wine, however, which is a good thing. Perhaps those Pedro Ximénez barrels are used more sparingly in the solera blending process, to the point where they contribute in the background without standing out at all.

Many tasters have put this Edición Negra rum one rung up from the 23 and one rung below the XO, which is also where it falls in price. Really though, that’s a matter of personal taste more than quality. If you like your aged rum unadulterated, then you might think of these blending experiments as blasphemy and won’t like the outside elements introduced in the aging process. If you like complexity and enjoy sipping a fine spirit neat for an evening, try out this Negra version and I doubt you’ll be disappointed. I was a bit skeptical up front, but after spending an evening sharing this with a couple friends who loved it, I’m glad they left me some to return to when I want to drink something special.

See more information at the Zacapa website and do a local web search to see where you can buy it in your area.