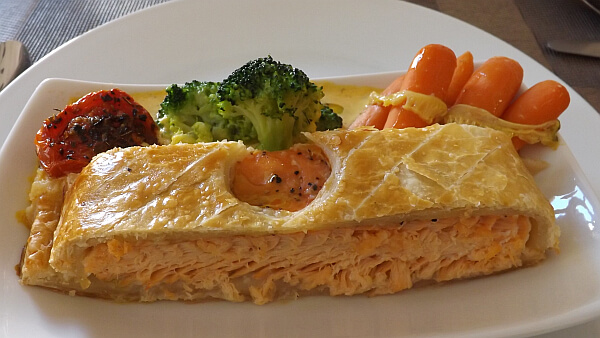 The restaurant situation in most cities is an ever-shifting canvas and there’s high turnover always. This post on the best restaurants in Guanajuato was updated in August of 2021 and will be revised when the scene changes again.

Though Guanajuato City probably receives 98 Mexican tourists for every 2 foreign ones, the local population is getting steadily wealthier and pickier, so the number of good places to choose from keeps increasing each year. So the best places to eat here is not limited to two or three restaurants anymore–though the pandemic did put a few places over the edge.

This is still no San Miguel de Allende, with 50+ places catering to resident foreigners, but the counterpart of that is it’s really difficult to spend anywhere close to $100 for two on a nice meal in the top restaurants here. You’d have to order a couple of bottles of wine to hit that level. When my wife and I dined at Amatxi, for instance, we had three courses and a few glasses of wine for $50 even. That’s considered pricey by local standards.

Here are the best bets for a leisurely meal in central Guanajuato City. There are some other fine restaurants in suburban Marfil, where the few upscale houses with a yard and garage are, but they require a longer taxi ride to get to and receive very few out-of-towners.

Mestizo – Housed in the gallery of famous potter Capello, his son is the owner and chef of this excellent restaurant that has never let me down. Every time I’m amazed at the beauty and flavor of what comes out of the kitchen after ordering from a menu where hardly anything tops US$13. It’s not the best spot for vegetarians as most of the choices involve beef, pork, or chicken with interesting sauces or marinades. Those who eat seafood will usually find at least one option though. No website, so go here for more info. 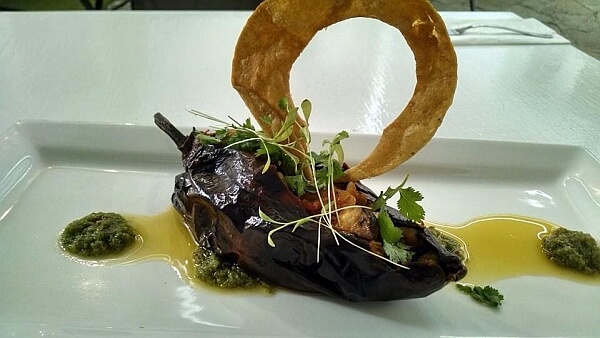 Las Mercedes – The original gourmet restaurant in Guanajuato still chugs along as one of the best and is a favored spot for romantic special occasions. Perched on a hillside in a residential neighborhood that requires a taxi ride from the center, here you can count on very high-end Mexican cuisine with some international influence in presentation and (scrumptious) desserts. It’s a romantic and cozy spot for date night. Open for dinner only Monday through Saturday. 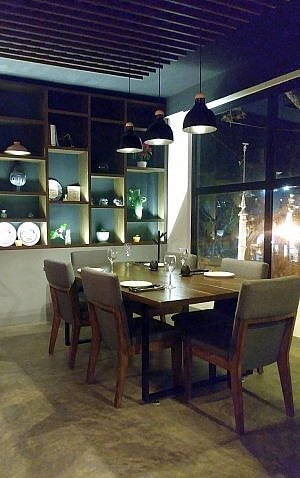 Amatxi – One of the newest upscale restaurants in Guanajuato, it is expensive by local standards but worth it for the kind of ambiance you normally find in a big city. This is a romantic spot on the second floor of another restaurant owned by the same family, up near the Presa de la Olla, next to a leafy park and the Palacio de Gobierno.

The best bets here are the meat and seafood dishes, especially the steaks. There’s also a range of interesting cocktails as well as beautiful desserts that look as good as they taste. There’s even a real bar you can sit at, with bar stools, which is a rarity in this city. No website, but they have a Facebook page.

La Vie en Rose – Owned by a transplanted French family, the bakery and restaurant La Vie en Rose gave new meaning to the phrase “instant success” when it opened in late 2014. It sucked in expats and upper crust Mexicans like a powerful vacuum cleaner as soon as word got out—which only took about a week. If anything, it has gotten better.

This place could hold its own in Paris with its divine pastries and heavenly food. Here in the colonial interior of Mexico, it’s got no competition within a four-hour drive. Everything you get here looks like a work of art and unlike most Mexican pastries, tastes just as special. See their website here and start salivating. La  Table de  Andrée is another French-themed restaurant that was open in a rather inconvenient location for a while, but has now relocated to a spot on Positos between the university and the Alondiga. I have only eaten there once at this point, but our dinner for two was terrific on all counts. You can get classic dishes like French onion soup and beef bourguignon, which I happily did, but they also have salads and some lighter fare. The chef came out to ask how everything was, which is always a good sign. You can order a good glass of wine or a craft beer here and it’s a romantic spot on two levels. 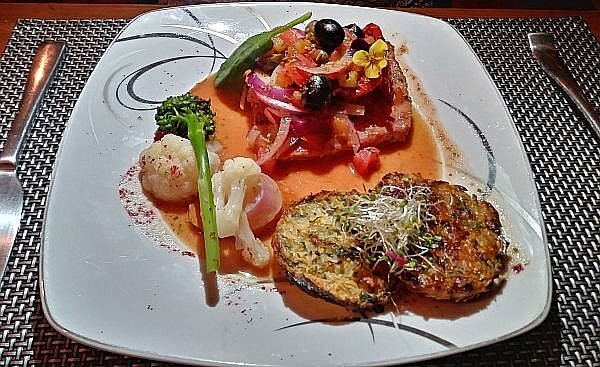 Oajillo Cafe – If you want to get a terrific mid-day meal at a good price, head straight to Oajillo in the Carcamanes 17 Hotel. Yes, the name of the hotel is the actual address. They serve a good breakfast in the morning but their real claim to fame is a revolving few set meal choices that show a flair and professionalism that’s often hard to find in this city. You can order a quality coffee or a craft beer if you’d like, or just get the aqua fresca and your bill will be less than $6. Most of the tables are indoors in an airy space, but you can eat outside on the patio as well. 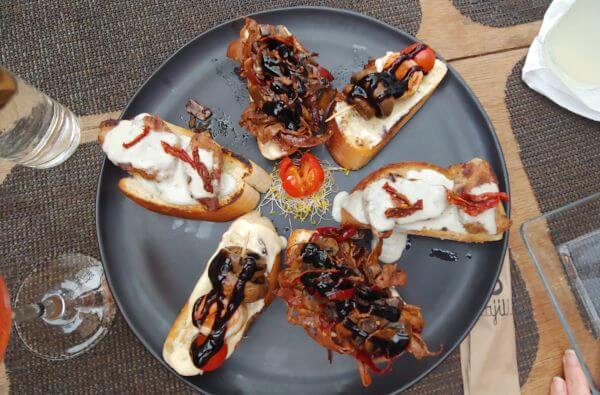 This is currently the best spot in the city if you’re looking for something innovative and different, plus they have a good selection of Mexican coffee, tea, local craft beer, and wine.

Casa Valadez – This local institution could previously just rely on its perfect location on the Jardin de Union, across from Teatro Juarez, and still bring in plenty of business to its outdoor seating. They now have to serve everyone inside instead, but Casa Valadez still packs in the free-spending tourists. The fine-looking restaurant serves a non-stop stream of upper-crust locals, domestic tourists, and foreign ones by serving up consistently good food.

The menu is heavy on traditional Mexican dishes, but they’re all presented with flair by well-trained waiters and you can also get a good steak or salad here—not always a given elsewhere. They serve all three meals and have the nicest bathrooms in Guanajuato. Yes, it seems a bit overpriced, but you can’t beat the location or the elegant surroundings inside. 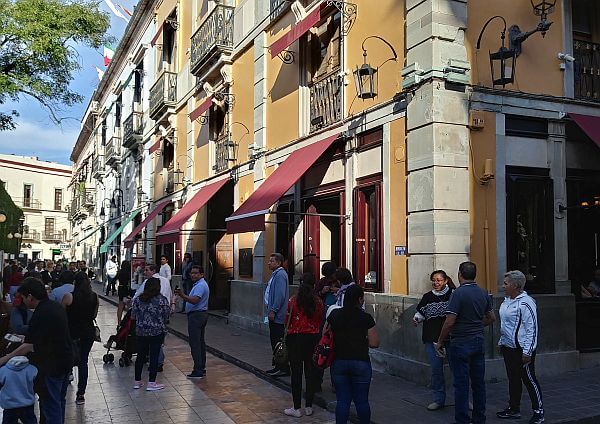 When I first lived in the city a few years ago, just coming up with this many standouts was a challenge. Now the bar is getting much higher and you could eat at a different place every night for a week and eat well. If you have a craving for Italian food, most put La Trattoria above Hotel San Diego in the top spot overall. But you can also try La Capellina near the main plaza or El Gallo Pitagorico that recently moved to the main plaza.

If you’re looking for something less fancy that’s not Mexican, there’s also a good falafel place called Habibti and a Japanese place called Delica Mitsu. Both are near Santo Cafe, which sits on a bridge above the street.

There’s an upscale Relais & Chateau restaurant in hotel Villa Maria Cristina up toward the Presa de la Olla. Also getting high marks is the Restaurante Las Vieyras in Hotel Casa del Rector, near the Diego Rivera Museum. We’ve been to Costal Cultura once and are hoping it will hang on. It’s in the upstairs of the gorgeous Casa Cuatro building between Baratillo Plaza and the university.

Unfortunately, the restaurant often named the best in the city is no more. Los Campos in Baratillo Plaza was run by a Canadian man (front of the house) and Mexican woman (in the kitchen) until the combo of a divorce and the pandemic lockdowns together dealt it a fatal blow. It may return at some point in a different location.

But check out his Los Campos liquor and wine store near the San Francisco church and plaza for an all-Mexican selection of spirits and vino.

After all this, if you get tired of fancy food and want to eat where the workers do, take a Guanajuato street food tour.

Sample Mexican Wine at the Catando Festival in Guanajuato City

The Best Restaurants in Latin America and Top Cities for Food
Share it!