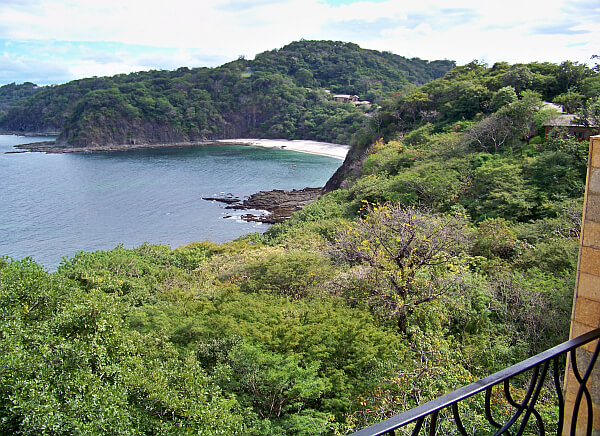 The weather in Costa Rica has a much bigger impact on vacation planning than it does in many other parts of the world, even in Central America. The best time to go to Costa Rica isn’t even consistent across this small but multi-faceted country. There may be torrential rain the whole month in Monteverde, but you may have clear skies in the Papagayo Peninsula or on the Caribbean beaches. 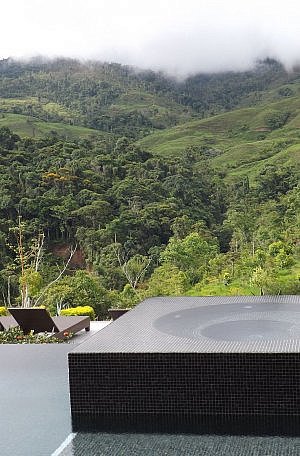 In general, this is a tropical climate, so there’s a dry season and a wet season. What you’re going to pack is based on that—not on temperature. No matter what time of year you go, you’re probably going to have highs in the high 80sF and lows in the 70s. You don’t need layers unless you’re going up into some mountains.

If you want to be sure to avoid any rain, this country has a shorter dry season than most. The rainy season in Costa Rica can be as long as mid-April through mid-November in the wettest parts of the country. In the Osa Peninsula you’re looking at 20-30 inches of rain per month some of those months.

The best bet for getting blue skies and sun is December through April for the interior and the Pacific Coast. Of course this coincides with when everyone else is going who is looking at the weather patterns, so crowds can be heavier. It’s not like the crowds drop to nothing in what the local tourism industry promotes as “green season” though. Since families have vacation breaks and couples have an easier time getting off work when the most rain is falling, the hotels and tour companies still get a fair number of clients. You can find better rates then, but the places won’t be empty.

Here’s a rundown of what to expect in some of the most popular areas for organized tours in the country.

Guanacaste Weather Throughout the Year

Weather in Liberia, which is a more convenient airport than San Jose if you’re vacationing here, is much drier than the rest of the country outside of rainy season and can actually get a bit brown and dusty while they’re waiting for the rains to return. The precipitation levels are next to nothing from December to April and even in the month with the highest rainfall (September), it averages out to less than a half inch a day.

So if you are looking for just a “kick back at the beach and pool” vacation in Costa Rica, you’re probably okay any month of the year. Head to Andaz Peninsula Papagayo or the Four Seasons and let them pamper you. Enjoy some water sports, see a little wildlife, and have fun.

People come to La Fortuna and the Arenal Volcano region for three reasons: travel adventures, a volcano view, and hot springs. You can enjoy that last one even if it’s raining—and whitewater rafting too for that matter—but many people are disappointed when their one day in the region has clouds and rain obscuring the volcano.

One way to be sure you’re not coming all this way to watch a rain storm is to time it right. Even if you’re only in the area for a day or two, it’s a pretty safe bet you’ll have clear skies in December, January, February, and March. The worst times to visit Arenal are mid-May through late October. In other words, bring the kids during Christmas break, not during their summer vacation. 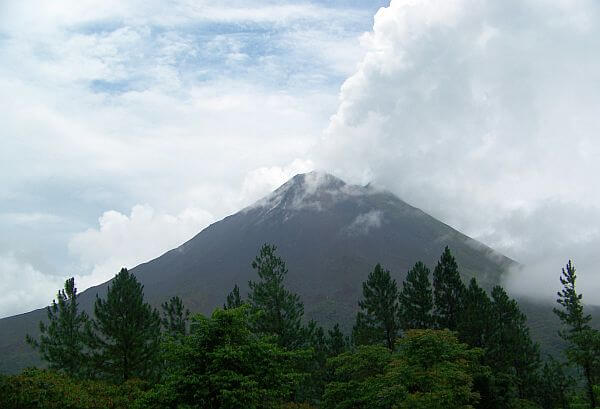 If you’re vacationing in La Fortuna during a rainy month, your best hope is to pray to the rain gods or to get up early in the morning to see the volcano. (That’s a lot easier if you’re staying in a resort with a view of Arenal.) Unless it’s raining when you wake up, the downpour will probably not happen until mid-day.

The Cloudforest Comes With Rain in Monteverde

The Monteverde Cloud Forest is one of the most popular places to visit on multi-city tours of Costa Rica, especially for those coming to the country on their first visit. It’s a great spot for learning about tropical plant life and maybe spotting colorful birds or a sloth.

Water is life in this ecosystem, so there’s at least a little rain and cloud cover all year. Some days are downright foggy. The driest months are January through March, next are April and December. The animals don’t mind the rain as much as we do though, so you may see more with fewer humans around in the other months.

Manuel Antonio National Park is the most popular in Costa Rica, despite the aggressive monkeys, because it’s easy to get to and is near a long stretch of beach that’s good for sun and fun. Most tours of Costa Rica come here first or end up here toward the end of the trip. To get there you pass near Jaco, where a lot of expats live, and the commercial hub of Quepos. 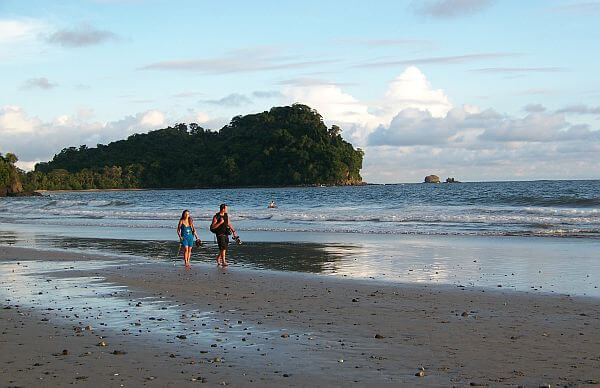 The weather in Manuel Antonio and nearby areas is similar to the rest of the Pacific coast, with the driest months being December through March. The Costa Rica rainy season is not really all that rainy here though, with more afternoon showers than days-long deluges. The average rainfall is 8-12 inches during the worst months.

The best time to visit Costa Rica is a little bit different if you’re talking about the Caribbean side of the country. The coasts are so close that some companies run biking trips from one to the other that only take a few days, but when it comes to precipitation they can be complete opposites. 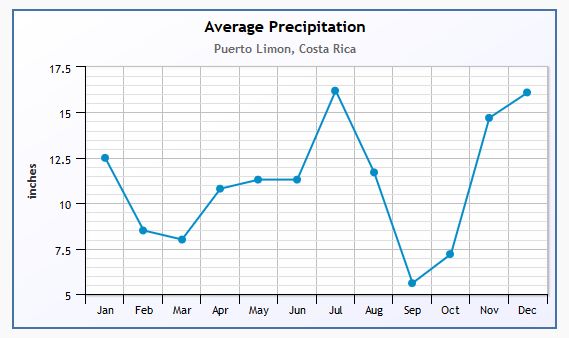 This chart above is from Puerto Limon, home to La Cameleon Resort we’ve got covered in our reviews. As you can see, the best times to visit there are September and October, when it may be pouring down buckets on the other side of the mountains. If you’re planning to visit Costa Rica in September or October, work the Caribbean beaches into your plans and do your jungle treks there instead.

Let an Expert Sort it Out

As you’ve probably figured out by now, timing your travels around the best time to visit Costa Rica is not very straightforward or predictable. Plus there are a lot of choices on where to go and what to do. I’ve been there four times now and would still be hard-pressed to find places on a map or figure out how to get there in a car. Half the time what looks like a short distance on a map is really five or six hours away, so then you’re better off taking an internal prop plane flight.

If you work with a travel specialist like Costa Rica Dream Adventures, you can let someone else sweat the details and get you the best experience for your budget. They have tours focused on luxury, adventure, wildlife, or other interests. Naturally they can help plan a multi-generational tour, a buddies fishing trip, or a week of romance too.

If you want to check the average weather patterns on a destination we haven’t covered here, this site for travelers has good in-depth info on temperatures, sunny days, and precipitation.

Yes Some Costa Rica Resorts Are All Inclusive

Get Extra Costa Rica Adventures on Your Tour

Explore More of Costa Rica on a Small Group Tour

Panama and Costa Rica the UnCruise Way on a Small Ship
Share it!