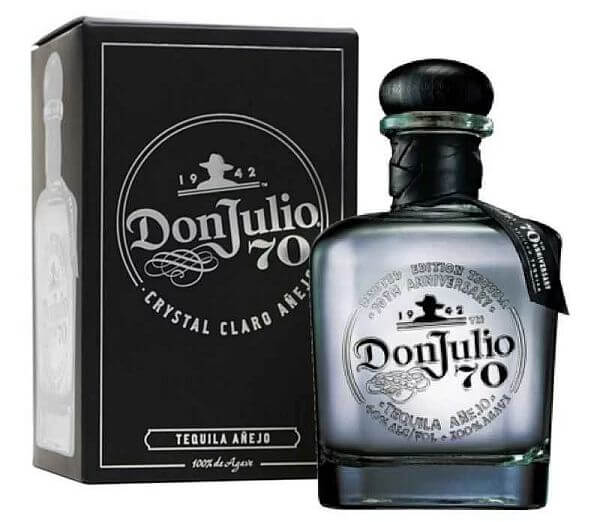 Don Julio 70 Claro tequila came out on the company’s 70th anniversary earlier this decade, but it has taken a while for it to spread out through distributors, retailers, and bars. I’ve been seeing it fairly often lately in Mexican supermarkets and hotel lounges though, so I tried it twice this past week to see if it’s worth your future tequila shelf investment.

We’ve long sung the praises of Don Julio, from the regular brand to the stellar 1942 one that’s among the best you can buy anywhere. This brand extension seemed like kind of a gimmick when we heard about it though and a rather pointless gimmick at that. Here’s the official explanation:

The “carefully filtered” part of that means, basically, that they have removed all the color. It’s as if you went to order a Scotch or Bourbon and ended up with something in your glass that looked like vodka. Somewhere in the manufacturing process they have effectively bleached a brown barrel-aged liquor to turn it white.

The Marketing of a White AÃ±ejo

There are a whole range of undesirable places this review could go and jokes that could be cracked. Anytime you’re trying to make something brown “more white,” it’s bound to arouse some suspicion. What’s wrong with being brown?

I said this product sounded like a gimmick to us at first and it still does really after trying it twice. What’s the point of removing the natural color from something you drink—wasn’t there a clear Pepsi one time that totally bombed? Are there people crying out for chocolate milkshakes that have been engineered to look like vanilla ones?

We’re guessing they did this for a few reasons though that sounded good in the Diageo corporate board room. First, they probably just wanted to see if they could do it and make it drinkable. Mission accomplished there.

Second, not all that many people sip fine tequila straight, especially outside of Mexico, so this was a way to get a smoother version into clear cocktails to get those trendy millennials to drink more tequila. Last, there’s the novelty factor that sets this bottle apart, which is no small matter when there are literally hundreds of tequila brands to choose from now.

The real test though is what the tequila actually tastes like on its own, especially since the “70” in Don Julio 70 also refers to the suggested retail price. There are a lot of really great premium tequilas available at that level, so this has to be more than just a novelty to justify the price. 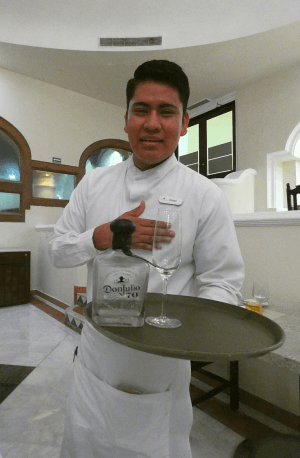 I ordered this twice: once in a bar next to the regular Don Julio Blanco tequila, which goes for about half the price, then another time on its own as an after-dinner drink at Hotel Casa Velas. In the first side-by-side test, it was obvious from the first smell and sip that this was a brown liquor posing as a white one. There’s never been a blanco tequila made anywhere that’s this smooth and refined. The agave that usually hits your nose hard before you even taste it was barely there.

A real clear tequila—sometimes called silver—is by nature the unrefined version. Even if it is triple-distilled, there’s no barrel aging to smooth out the rough edges and tone down the fire. Some drinkers love this type because they think it’s the real deal, maybe even more manly. But most people use the silver version for mixing in cocktails, where the additional ingredients can provide the smoothing-out function.

If you close your eyes and sip this, you might think you’re drinking a messed-up version of Don Julio AÃ±ejo. There’s the maturity that comes from being in oak barrels for 18 months, the wider array of smells and tastes that come from the liquid going in and out of the wood. Apart from vanilla and oak though, a lot of the flavors seem to be neutered and watered down a bit, like they got filtered out along with the color. They’re all still there to some degree: hints of toasted marshmallow, leather, a little almond maybe, but most of them don’t linger. Even the agave fades away on the finish, so it’s like blanco and anejo fought to a draw, neither looking good after the brawl.

The odd thing is, this tequila can taste quite different five sips later though, even if it’s from the same glass. That’s an interesting experience, but also a testament that the flavors don’t seem to gel. It never rises to the level a good aged tequila does, with every element playing its part in a symphony for the taste buds. I would never turn this down if someone handed it to me. I just find it to be kind of a parlor trick.

It’s a trick that seems to be catching on. Most of the major tequila brands have now launched some version of this colorless aÃ±ejo chemical concoction.

This Don Julio 70 is worth ordering in a bar to check out yourself, or buying in a store if you see it deeply discounted. Purchase it more for the pretty bottle, the novelty factor, and the premium cocktail function though. If you’re going for a great aged tequila to sip neat, you might as well get an unadulterated one that looks like what it really is instead of playing tricks on your perception.

The USA list price is $70, but you’ll find it for a good bit less if you shop around. In Mexico it goes for less than $50, but it’s easier to find in bars than stores.

Maestro Tequila From Cuervo and Dobel