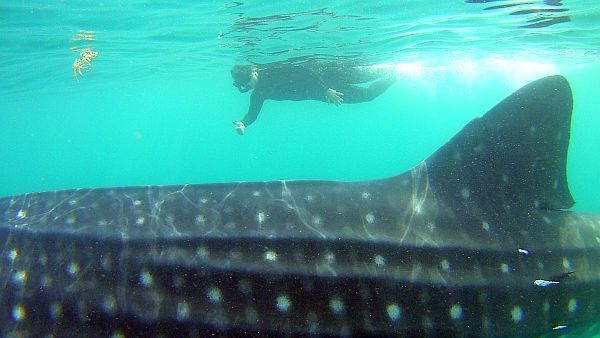 Swimming with whale sharks is an experience like no other. Often the adventure involves being out on a boat in rough seas though, far from shore, and the giant creatures may or may not be near the surface. It’s much more pleasant in La Paz in Mexico, however, where they like to hang out in relatively shallow waters in a bay close to the city.

Whale sharks are the biggest fish in the world and it’s not just their size that is mesmerizing. The white spots on the body seem to glow when you are swimming up close to them as a diver or snorkeler and their mouths are simply huge. They’re mysterious in many ways, swimming vast distances throughout the year to visit the best feeding grounds. They’re not meat-eaters though like most other sharks. They feed on plankton, krill, and other small sea nutrients that flow into their big bocas.

In some parts of the world you need to be a scuba diver to get close to whale sharks, but near La Paz you just strap on a snorkel after a 15-minute boat ride and hit the water with your guide when he or she spots one from the boat. And they’re almost sure to spot one without much of a wait: the whale sharks here are sticking around a relatively small area where the buffet is especially good.

If this all sounds too good to be true, well there is a slight trade-off. A fully grown adult whale shark can reach 40 feet in length (12 meters) and weigh as much as 20 tons. The ones swimming around the Baja Peninsula are juveniles, however, usually three to five years old. They’re more likely to be 12 to 20 feet long instead, so no fears here that you’re going to encounter one with a mouth big enough for you to fit into whole! These kids have a long life in front of them: they’ll likely live as long as you will or more, as in 70 to 100 years.

Even those these may be youngsters, they’re still an amazing site to see and they will dwarf any other fish you’ve seen in the water while snorkeling. They’re docile and not all that fast, however, so you can swim along beside one and look it in the eye. It probably won’t seem to bothered, just like it’s not too bothered by the sucker fish attached to its body here and there. Here’s a video from the footage I took when we were whale shark snorkeling in La Paz:

After this great experience, you’ll usually go see some sea lions on an island and possibly snorkel with them, but it’s generally crowded and can be kind of a bust. (It’s much better to do it off Isla Espiritu Santo national park on a separate tour.) Then you head to Balandra Bay, however, where you have lunch on a stunning beach.

I’ve done this tour twice now, first on my adventure tour through Baja Sur, then a second time a few months ago. The regulations were pretty solid the first time I went, but they’ve been tightened up more since.

First of all, the boats are only allowed in a certain part of the bay. The sharks get a quiet zone in the rest of the area where nobody can bother them. They’re coming to this part by choice and can leave when the pesky humans start getting on their nerves. Here are the other regulations in place, enforced by a government ranger that boat captains have to check in with on the water: 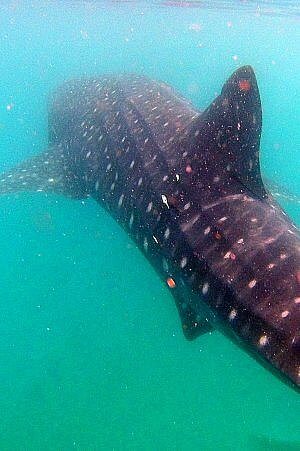 – The season allowed to view the big fish is October through May.

– Only six people at a time max are allowed in the water, though the good companies keep it at four and alternate passengers.

– Snorkelers must stay 16 feet away from the head and 20 feet from the tail. No touching allowed!

– The business owner, boat captain, and guide all have to have certificates of training completion

Since the regulations above have eliminated a lot of the bad actors operating in this space, it’s harder to get onto a bad tour than it used to be. There are still reportedly 85 licensed operators in the La Paz area though, so that’s a lot of boats still competing to take you out on this popular tour.

I don’t feel really comfortable recommending specific local operators since they frequently change names and staffers with regularity, but if you book through a well-known adventure tour company that has been active in the area for a long time, with a good reputation, you’re probably going to be fine. I’ve personally deal with Todos Santos Adventures, Baja Outdoor Activities (BOA), On Board Baja, and Sea Kayak Adventures. If you want some extra peace of mind, you’ll have someone to complain to if you book through Viator. 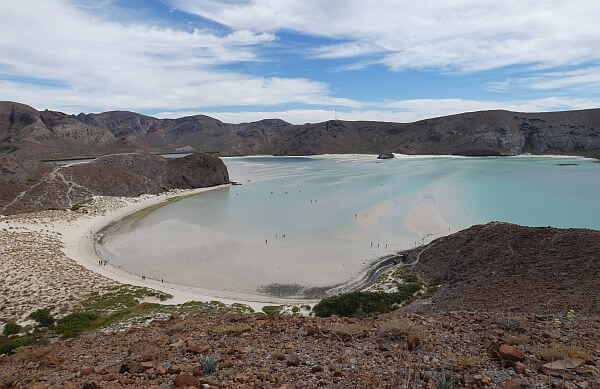 As always, the best advice is to shop around and rely on personal recommendations. This is not an activity where you book the cheapest trip from some tout on the malecon to save five bucks. Go with a professional company that puts the well-being of the whale sharks as high as the well-being of their bank account and has a long-term vision. The trip cost rarely rises above $80 unless you’re having a gourmet lunch or something extra is added on besides sea lions and the beach, so do it right and make this a special day.

The video embedded in this post was made using InVideo.io

Why Summer is Still a Great Time to Visit Belize
Share it!