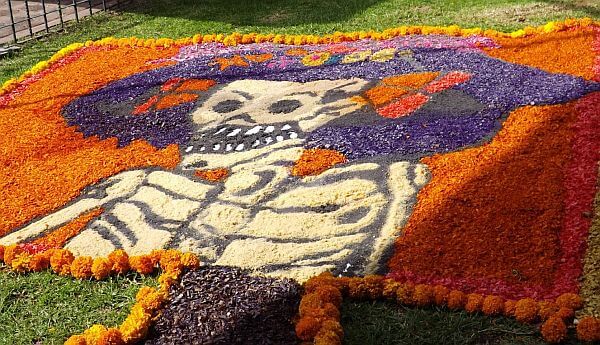 Day of the Dead in Mexico is a more complicated affair than Halloween and probably dates back even further. Just like its counterpart, it has gotten more commercial over the years, but at heart this is still a family affair. While the sugar skulls, parades, and Catrina figures get all the attention, it’s the family alters that are at the heart of the holiday.

Dia de los Muertos is a very Mexican event though, with the Mexicans’ unique view of death having a big impact on the ceremonies. Houses have an alter dedicated to the ancestors, with items they liked placed there, such as tequila, or cigarettes, or a certain snack. Whole families will visit the graves of their relatives in the cemetery and it’s far from a somber affair. There will be bottles of tequila, coolers of beer, and mariachi music bands strolling around to serenade those who have passed on—plus their visitors. Outside the cemetery gates there will be vendors selling snacks, micheladas, and cheesy toys for the kids.

Out in the streets there will be sugar skulls and chocolate skulls for sale, marigold flowers to put on graves and alters, and huge public alters that are in markets and in front of churches. In some cities there are artists creating types of Day of the Dead mosaics on the sidewalks with flowers, rice, and beans. At night people show off their make-up jobs and put on fancy period clothing, creating a scene of the late 1800s coming to life—with skeletons! UNESCO has recognized the event with an “Intangible Cultural Heritage of Humanity” designation. Appropriately enough, many of the best celebrations are also in UNESCO World Heritage historic cities and towns. 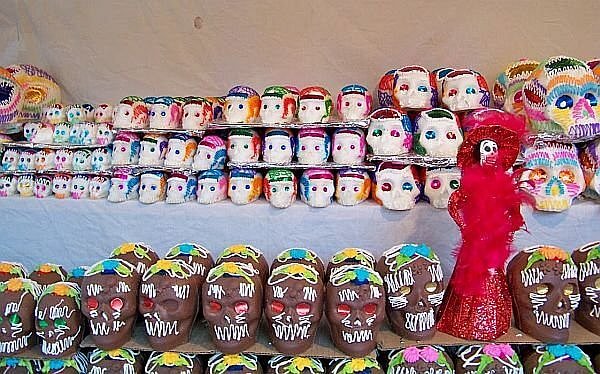 These days it’s generally a three-day event, bleeding into Halloween on the 31st and running through the night of the second. Technically, November 1 is the day to remember children who have died, that night is “Night of the Dead,” and November 2 is the real day. But that night is when many people come out into the streets in costume.

Since we are based in Guanajuato, we see it all up close and this year it will probably be even busier. As the Pixar movie Coco has become smash hit around the world on DVD and streaming services, cities like Guanajuato and Oaxaca that played a part in the visual inspiration are getting a new rush of visitors from abroad. If you’re planning to attend any of the festivities in the future, plan as far ahead as possible. It wouldn’t be a bad idea to make reservations a year ahead for Oaxaca or Patzcuaro, especially if you have a group.

The Original Spot: Patzcuaro in Michoacan

Many consider this “the original” and most authentic of the Night of the Dead and Day of the Dead celebrations in Mexico. For centuries before the Spanish arrived, the indigenous tribes of this region were having full-blown rituals to welcome visits from their ancestors at this time of year.

The lake region around the city of Patzcuaro is full of villages that have their own twist on the event. Many travelers plan a whole itinerary around the region over two days to see the alters and celebrations. One of the highlights for many is a trip by boat out to the island of Janitzio, where the glowing candles make it seem even more magical than usual.

The popularity of Patzcuaro has gone up and down over the years depending on the perceived security situation in Michoacan, but Oaxaca has stayed a popular constant. With a heavy indigenous population in this state and and a magical colonial interior, this is in many ways the epicenter of Dia de los Muertos in Mexico. 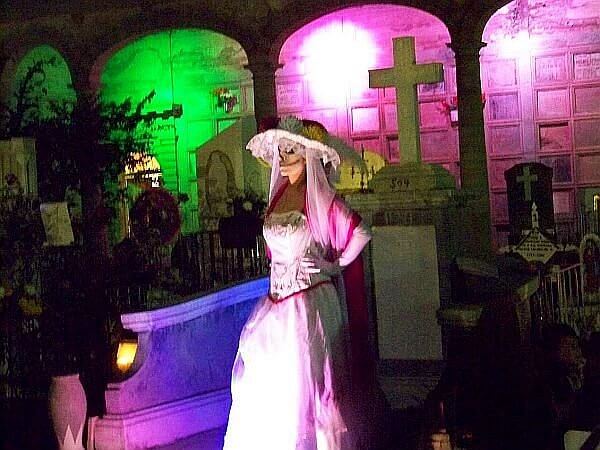 The Panteon General, the largest cemetery in the city, will be the most crowded and active. It’s about a 20-minute walk from the center. There are two more in Xoxocotlan, which requires a taxi ride out of the city. These days those are likely to be just as crowded with visitors. If you want a really authentic experience, connect with someone who lives in an outlying village and visit their local one instead.

See our detailed reviews of the best luxury hotels in Oaxaca.

The Winding Streets of Guanajuato 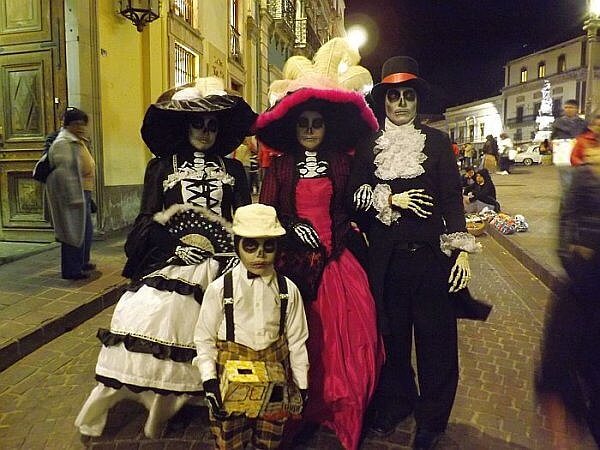 The city that’s home to the Mummy Museum—basically a collection of dried-up corpses behind glass—has to be big into Day of the Dead, right? Well yes it is, and here the setting seems about perfect for the human skeletons moving through the streets and the alters in front of colonial churches.

The family affairs at the cemetery and in homes happen at the usual times, but the public events start sooner. The street vendors start setting up at least a week ahead, supplying what people need for their alters and the parties. There were food trucks and bands in one of the tunnels starting on the 30th this year and dance club events heading into the weekend. There will be a party in the streets the night of, with enough revelry to wake the dead perhaps. If the cemetery scene seems too intrusive or creepy for you, relax. You can just wander the streets here and have hundreds of great photos.

See our reviews of the top luxury hotels in Guanajuato.

Day of the Dead in Mexico City 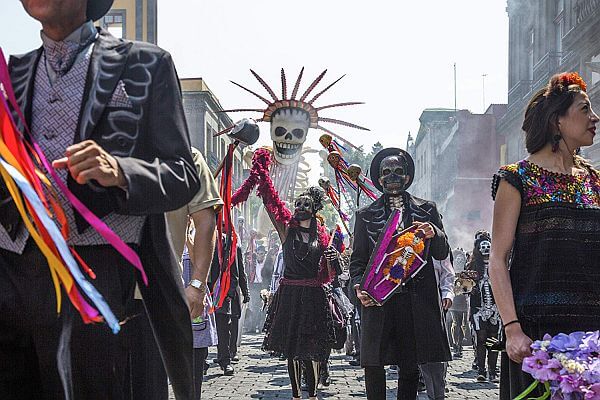 The capital of Mexico wasn’t traditionally a big center for Day of the Dead celebrations, but that all changed when the James Bond movie Spectre came out in 2015. It opened with a huge (fake) parade in the Zocolo which was devised as a plot device that would make for a great opening. In a case of life imitating art, a parade the weekend before the actual holiday, modeled after the one in the movie, turned into an event that now attracts at least 2.5 million people to see it, blocking traffic for miles around. Giant puppets, formerly not a part of Dia de los Muertos events, are now a big draw.

Hey, traditions evolve through the ages. Don’t forget that the Catrina figures didn’t even exist until the late 1800s. They were popularized by a satirical cartoonist in newspapers and took off.

For a more sedate affair, head to a neighborhood cemetery and just observe. There’s more going on during the day than at night usually, though the latter will be plenty spooky if you go then. Keep an eye out for other events on November 1 and 2 as there will be a lot happening all over.

See our recommendations for where to stay in Mexico City. 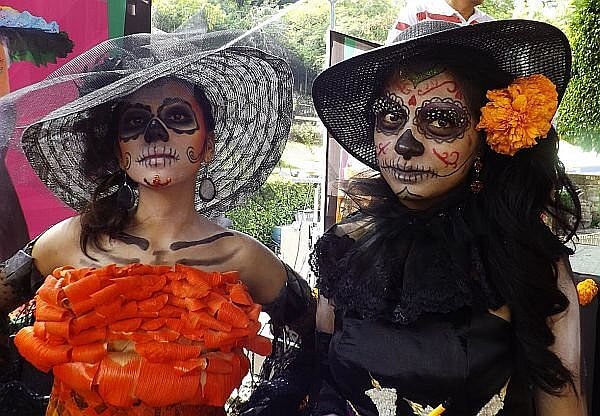 These four places aren’t the only spots with Day of the Dead events going on of course. If you happen to be in San Cristobal de las Casas, San Miguel de Allende, or even Puerto Vallarta instead, just ask around and wander. Or head to the local cemetery…

Riding El Chepe Train Through the Copper Canyons of Mexico

Exploring the Beaches and the Coffee Farms of Huatulco, Mexico
Share it!