It’s mid-December as I write this and I’m already getting lots of out of office replies for the holidays. Many of those office workers have checked out until January and will not be setting foot back in their office until the new year. But what about that meeting you were supposed to have that can’t wait until then?

Fortunately, it’s getting easier all the time to have a face-to-face meeting via video conferencing. Whether you’re trying to devise a marketing plan, structure a deal, or just put out a fire that flamed up after everyone took off for vacation, it’s easy to pull people together with just a good internet connection.

There’s always Skype, which can work in a pinch, but the video quality is erratic at best and you have to already be connected to everyone you want on the call—lumping them in with your personal contacts. There’s Facetime, but that doesn’t work so well for multiple people and you all have to have an Apple product in your hand. There’s Facebook Messenger, but the video quality is often awful in my experience. Many of us used to be tapped into Google Hangouts, but since it was integrated with Google+, which is now a discontinued service in the big pile of Google failures, it’s now a separate app that hardly anyone has on their device.

Professional Video Conferencing With No Cost

The most reliable solution is to go with a professional company that does video conferencing as its main business. Big companies have been paying to tap into these systems for decades, but it was cost-prohibitive for small businesses and individuals to join up until high-speed internet became ubiquitous. Most free or cheap plans often come with restrictions though, even now.

One of the best-known companies in this space is Zoom, which is a step up in video and sound quality, but meetings are restricted to 40 minutes if you don’t pay at least $15 a month. GoToMeeting starts at $12 a month and GoToWebinar starts at $89 per month–and those prices are when you commit to a full year and pay up front. 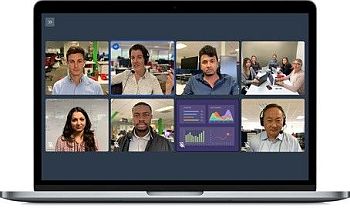 I’ve been trying out a service called 8X8 Video Meetings that is more generous on their free plan, allowing you meetings with up to 50 participants, with no limit on how long you talk. The aspect I really loved though when I used it for two business meetings this past week was how dead easy it is. When I’ve used Zoom in the past, there have been lots of hiccups because first everyone has to get dial-in instructions and/or download the software to join the meeting. With 8X8, all I had to do was e-mail or text them my meeting room URL, they clicked on it, and they were in! It was dead simple to use.

There’s also a dial-in number if someone is in a car and can’t use the video function. I should say “numbers,” because there are 11 toll-free number options and then regular ones in 58 different countries.

Once you sign up, you can easily integrate 8X8 Video Meetings with your schedule by connecting your Google, Microsoft, or Virtual Office calendar. I didn’t try this out, but there’s also a way to sign into YouTube and do a live streaming of your video conference, which could be good for a media interview situation.

For both my meetings we talked for around an hour, with no worries that we were going to kicked off. The intuitive controls let you mute your mic, enter text in a chat, or share your screen. I didn’t record these calls, but there’s an option to do that and store them with a cloud service. On this free plan you do have to allow their branding logo on the screen for group meetings, but to me that’s a small price to pay. There are no ads and I haven’t gotten deluged by marketing e-mails after signing up.

I was doing these meetings from my home office, but I could have just as easily done them from a villa in Los Cabos, a living room facing the beach in Costa Rica, or looking out at the mountains in Patagonia. There are plenty of people around the world running their business from an exotic location without missing a beat in their communications.

Sure, if you’re running a sizable company or you want more features, it could be worth it to get on a paid plan. Even the lowest-tier 8X8 Express one, at $12 a month per user, gives you a virtual call center with video conferencing, music on hold, a separate phone number, chat, and texting. With no cap on call times. There’s a 30-day free trial too. The company has some sizable corporate clients like Regus and McDonald’s on the larger plans that include extras like virtual faxing, voice mail transcription, international dialing, and CRM integration.

This post was made possible by the financial support of 8X8, but all opinions are our own and we only cover products that we have used ourselves and liked.

The American Vacation Budget Tops $2,000 This Year
Share it!