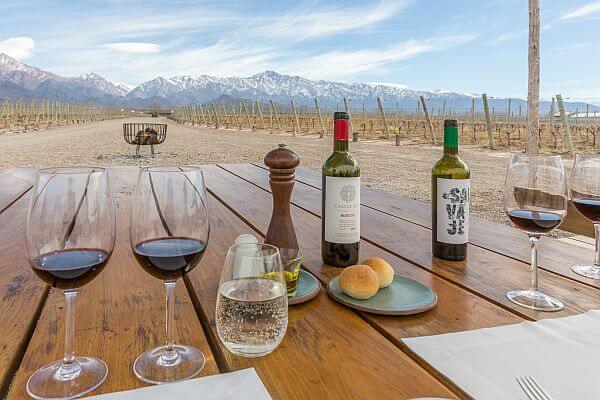 Back in the ’00s when we first started covering winery hotels around Mendoza and the vineyard region, there wasn’t all that much to talk about. Most of the “bodegas”–as the wineries are called in this area–don’t have any kind of lodging attached to them. The ones that do have a hotel though have gotten both more numerous and more luxurious.

Back in 2010, there were only two wine resorts in the Malbec region of Argentina that we considered worthy of our readers: Cavas Wine Lodge and Club Tapiz. Both can give you the opportunity to be smack up against the grape vines and you can set up wine tasting tours, pruning workshops, winery tours, or grape picking depending on the time of year.

Over the years though, we have added more Mendoza wine lodges to our coverage. One ideal way to explore the area would be to spend a few days in one of these, then depending on your travel schedule, start or end at the Park Hyatt Mendoza in the city itself, maybe trying out a couple of the best restaurants in Mendoza while in that central location.

Here are the best wine lodges around Mendoza to consider when you visit Argentina: 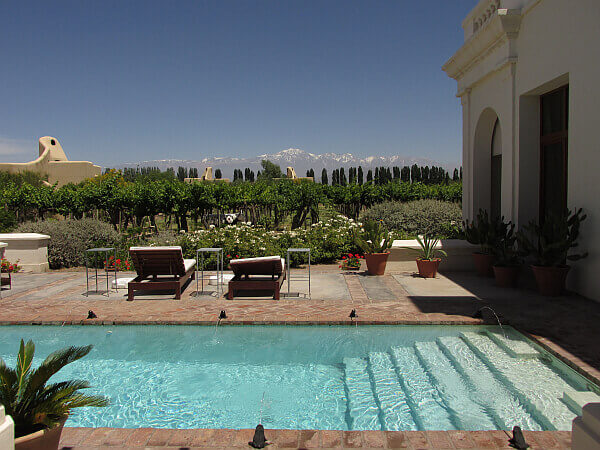 We mentioned Cavas earlier because this is the longest-running luxury winery hotel in the region, the real pioneer that got it all started. It has a main building complex with rooms, a restaurant, and an excellent spa with vinotherapy treatments. Other casitas are scattered around the grape vines, with a roof deck for an Andes Mountains view by day and a sky of stars at night. See our review here. 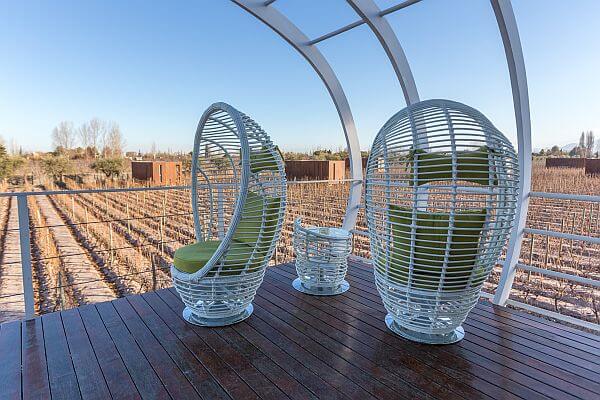 Celebrating a decade in business now, Entre Cielos was the first to challenge Cavas as a wine-centric Mendoza region hotel and it’s still one of the best in the region. It has a different vibe than many of its competitors thanks to Swiss ownership and a full-blown Turkish hamman with a relaxation circuit. The differences don’t stop there though, as our reviewer noted:

Right off the bat, the hotel established its European/Latin personality with a resort-like pool, an honor bar, a lobby wall covered in oversizedâ€“style magnets for guests to manipulate into playful phrases, a jar of freshly-baked cookies on the bar all day, and a multi-station Vita Parcours outdoor fitness course. They added a ‘no children under 12’ policy to maintain the playful but sophisticated atmosphere.

The lodging choices are varied, with 15 original rooms, a raised tubular structure with skylights and a balcony that looks to some like an alien spacecraft, and eight Vineyard Lofts distributed among the grape vines. 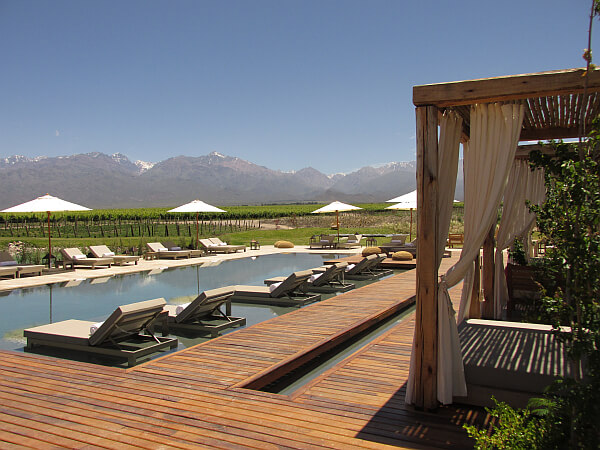 A very chic, very wine-focused resort with individual villas surrounded by grape trellises, The Vines Resort and Spa in Valle de Uco opened in 2014 and vaulted to a lot of “best of South America” lists. There are six one bedroom and one-bedroom deluxe villas, then seven two-bedroom deluxe villas. There’s plenty of room to spread out, with unit space ranging from 1,000 to 2,700 square feet. Then there’s a swimming pool, a wine bar with 100 choices by the glass, a spa, and the well-known Frances Mallman restaurant Siete Fuegos on site. 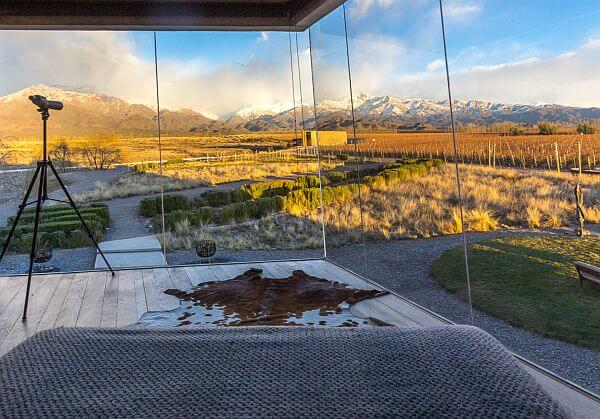 Also open since 2014, Casa de Uco is another high-end winery hotels choice that gets a lot of accolades in the Uco Valley region. With stunning views of the mountains from rooms or the swimming pool, this is a great place to look out and the Andes with a glass of wine in hand.   Or get a grape seed exfoliation at the spa with vinotherapy treatments. Included in the guest experience are a horseback ride through the vineyards and an archery class, while there’s also a well-known restaurant on site with English-speaking staffers and of course plenty of chances to try out the wine, starting with the included winery tour and tasting. You can also hop on a bike to explore the area. With only 19 rooms, you won’t be sharing the place with a whole lot of other visitors, even at peak capacity. 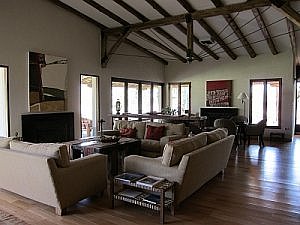 Sister to the Algodon Mansion Hotel in Buenos Aires, the San Rafael area Algodon Wine Estates is part of a huge real estate and vineyard project on more than 2,000 acres. This is far enough from Mendoza itself to have its own airport, as in 140 miles away. (The Mendoza wine-growing region sprawls over a huge area, so keep that in mind when setting up your plans.)

The focus is on getting your body moving here, with a full golf course that meanders through the vineyard areas and a championship-level tennis facility. There are also wine tastings, of course, as well as spa treatments. While this hotel has more of a domestic appeal than the others on this list, it is still worth considering if you want to explore a less-traveled part of Argentine wine country.

The original Mendoza region winery boutique hotel has a lot more competition than it did when we first started writing about Argentina, but it’s worth considering if you’re not looking for opulence and a long list of facilities. Club Tapiz is also much easier to get to than many of the others on this list, at only about 20 minutes from Mendoza itself. It’s located on the site of an award-winning winery though and you can ride a horse carriage through the vines, help with pruning or picking, and tour the facility where the magic happens.

Despite just seven rooms (and the main mansion building that can be rented out by a group), there’s a swimming pool, spa, library/reading room, and restaurant on site. See our full review here.

No matter which of the Mendoza winery hotels you choose for your Argentina wine tour visits, you will have great views of the Andes range, you’ll eat well, and you’ll drink well. In the ones we highlight, you’ll get plenty of pampering as well and have plenty of activities to choose from. Most of them can arrange additional excursions like rafting or trekking.

Entre Cielos, a Quirky but Luxurious Wine Hotel in Argentina

The Cities Beyond Buenos Aires in Argentina
Share it!