I have been coming to Mexico for around 16 years and I’ve lived in the country off and on since 2010. The first time I tasted Charanda, however, was in 2020. This despite the fact I live one state north from Michoacan, where this rum-like liquor is made. 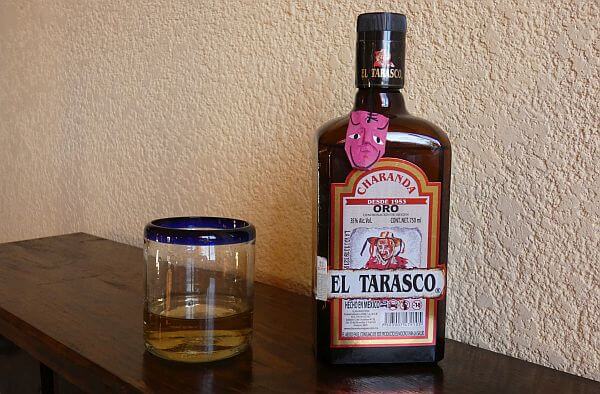 There are a few spirits from Mexico you have probably heard of, but there are quite a few others that exist under the radar, mostly sold to locals. You’ve got Sotol in Chihuahua, Raica in Jalisco, some odd herbal concoctions in Yucatan state. But it took me more than a decade to even hear about Charanda, which just might be the best bargain in Mexico.

Charanda is a double-distilled liquor made from sugar cane. So in terms of production, it’s in the same family as rum or cachaça. It tastes like neither of those though, which is what makes it so intriguing. You can find decent rum-like spirits anywhere that sugar cane is grown, including Thailand and the Philippines, but they usually taste like an inferior version of rum. Charanda, however, tastes like nothing else you’ve ever had. In a blind taste test, you might not have even called it rum, it’s that different.

First of all, the nose is much more intriguing and unique than any random cheap rum you could pick up somewhere. When you stick your nose into a glass of this spirit you get a bouquet of cut flowers, a tray of suites on the table, or a basket of fruit that’s going to spoil if you don’t eat it in the next few hours. There’s nothing simple or straightforward about the smell, which makes you think, “What they heck am I going to be drinking here?”

Then when you take a sip it’s bursting with aromatic flavor, with more hits of spices, flowers, and fruits than you would ever expect from something made from sugar cane. There’s a bit of alcohol burn when it’s first poured, but after it sits in the glass a while it mellows out and is surprisingly easy to drink. The finish is nice and smooth.

Part of that effect is probably the somewhat lower alcohol level. Charanda is usually 35% if you buy it in Mexico, which is a few notches below domestic tequila, mezcal, or rum, which usually clock in at 38% or more. There is probably a bit more burn in the exported versions.

How This Type of Rum is Made in Michoacan

Anything in the rum family is made from sugar cane, which in itself isn’t all that complex. Most of the sugar going into charanda though is grown at 1,500 meters or higher. This is unusual in itself since cane grows close to sea level, but this supposedly gives it a higher sugar content in the cane as well. The local well water in this part of Michoacan also gets high marks for purity.

The distillation process for this spirit is similar to other rums, the usual extraction, fermentation, and distillation–in this case in copper pot stills. The various brands divert a bit after this, some including molassas, some aged in wood barrels, one even adding mushrooms to the mix for some odd reason.

Charanda gained a legal “protected denomination of origin” in 2003, so anything with that word on the label has to come from one of only 16 municipalities in the Mexican state of Michoacan. So the brand pictured at the top has a little wood representation of a Michoacan mask. (The state is better known for the craft villages near Patzcuaro, the country’s biggest monarch butterfly preserve, and its gorgeous capital of Morelia.)

While few people have heard of this spirit, it’s been around since the 1700s, so they’ve had plenty of time to perfect the process and learn from experimentation. The result is one of Mexico’s best values on the liquor shelf, good enough to sip neat but versatile enough to use in multiple cocktails. You sure can’t beat the price: the label on the El Tarasco brand featured here says 70 pesos. At the time I bought it that was $3.50! A decent bottle of booze for less than a beer in an American bar. Prices below are for imports found in the USA, but if you’re in Mexico you’ll pay a fraction of that.

As far as I can tell without traveling to Michoacan to learn more, there are only six or seven distilleries producing this spirit, so this is not a situation like you have with mezcal and tequila where there are hundreds of choices. Cartel violence has scared many people away and put a damper on business, while in other cases farmers have found it more profitable to grow something besides sugarcane. Here are the brands you are most likely to see, the first two made by the distillery doing the most to keep this traditional spirit alive.

I’ve bought this twice now and have seen it in a supermarket for a mere 62 pesos. Depending on the exchange rate, around 3 bucks. You don’t expect much for that price, but the El Tarasco Oro brand is better than most regular Mexican rums I’ve tried. It’s pleasant from nose to finish and has far more complexity than cheap rum has, good enough for sipping. The bottle makes you smile too, with its little wooden mask and a traditional dancer like you would see in Patzcuaro. 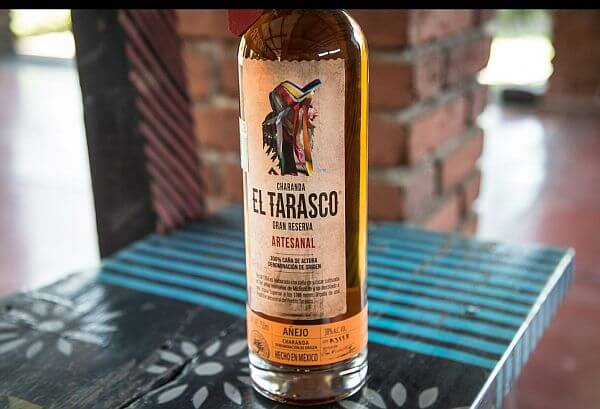 They do make a higher-end “gran reserva artesenal” añejo version in a more traditional-looking bottle and a higher price tag if you’re scared off by the other version. I was able to find a bottle of this on a subsequent trip to a local store in Guanajuato and it was less than $20. Despite that, it had the heft and smoothness of a fine sipping rum and it gave cocktails a lot of character. It loses some of its wild edges in the mellowing aging process, but both versions are good in a different way. I would rather buy this again than some of the Mexican rums I’ve tried.

In Mexico the El Tarasco Oro is bottled at 35% alcohol. The añejo Gran Reserva is 38% in Mexico, in the import versions it’s 40%. 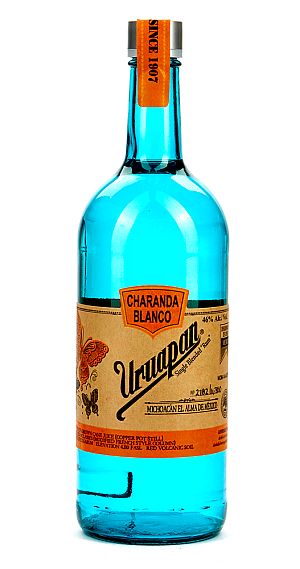 The Charanda Uruapan brand is probably the easiest one to find in the USA and is considered more of a premium brand. It is made from a mix of cane sugar extract and molasses that is fermented with wild yeasts and then distilled in copper column stills.

There’s a blanco version with this mixture, then an “agricola” version that’s made only from sugar cane. Then there are other versions aged in barrels. The price is generally between $20 and $35 for one liter and the import versions have a higher alcohol level of 47%. This and the El Tarasco brand are made by the same distillery and seem to be the only ones exporting in any quantity.

This is the “artisanal” version of the bunch, commanding a higher price and with a little more effort put into the packaging slickness. Double distilled from sugarcane grown at high altitude, it’s a mix of rums aged between one and three years in oak barrels. I haven’t tasted this one yet, but a local store where I live in Mexico has it, so perhaps on a future shopping trip.

The oddest version I have seen at that store is Sol Tarasco Extra Aged Charanda Hongas. Even if you don’t know Spanish, you’ll figure out what hongas are by looking at the label and seeing a clump of mushrooms? Why would anyone put mushrooms in with rum? You’ll have to ask a local in the region–it supposedly has some kind of medicinal properties. From the reviews I’ve seen though, the mushrooms take a distant back seat in terms of the flavor profile.

While we’re on language, the word charanda means “red soil” in the local pre-Spanish dialect and that volcanic soil is a good reason Michoacan is one of the country’s largest producers of avocados, limes, and yes, high-altitude sugar cane.