Those of us who are used to taking off on a trip lately are feeling a serious case of wanderlust. If you’re in the same boat and are missing travel, we’ve got a few options to bring a taste of Latin America into your kitchen.

If you can’t travel to the region right now to satisfy your wanderlust, at least your tastebuds can if you make these dishes from Mexico, Central America, and South America.

A Taste of Mexico

You probably don’t need us to tell you how to whip up some guacamole, a burrito, or a plate of tacos, so we’re bringing you something more exotic from Mexico.

If you’ve even been to the Yucatan state west of Cancun’s Quintana Roo, you know their cuisine is much different than what you think of as traditional Mexican food. These dishes often have indigenous names too, some in the original Mayan language of the region. Tikin Xic is a whole fish recipe that uses a lot of common ingredients, but adds axiote seasoning with two types of peppers and this one includes mashed plantains. (You could sub in rice or tortillas.) 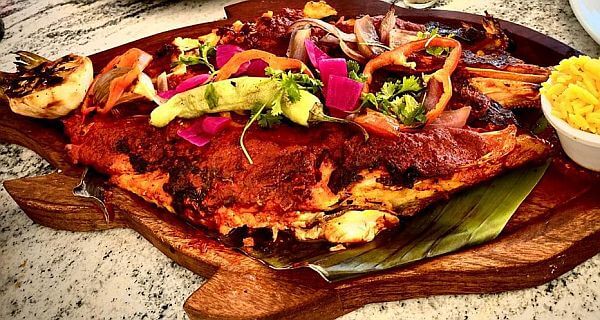 You can try it yourself if you travel to Grand Velas Riviera Maya later, one of our favorite luxury all-inclusive options on the Caribbean coast. See our review of the hotel here and follow this link for the Tikin Xic recipe. 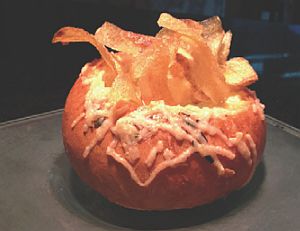 Looking for something festive to create a private party at home? Here’s a dip from Live Aqua Cancun that has a nice kick to it and feels like a Mexican version of Super Bowl food. You might want to prepare this on a day when you’ve managed to get some exercise because when it hits the table during an all-inclusive dinner at Live Aqua, it doesn’t tend to last very long.

The required items in this recipe are easily found in a typical American or Canadian supermarket, like chicken broth, whipping cream, and onions. You’ll need some spinach and a few habanero peppers too though. You can serve it with tortilla chips, garlic bread, potato chips, or crackers. See the full recipe here.

A Taste of Belize at Home

The food of Belize is a mixed bag that reflects its multiple influences. You’ve got Caribbean-inspired dishes thanks to the extensive coast, a few Central American staples, and dishes dating back to Mayan times that have drifted down from the Yucatan or east from the jungle areas and what is present-day Guatemala.

If you’ve had a real Belizean breakfast while vacationing in the country, you’ve probably had some fry jacks. This fried dough concoction is popular throughout the country and it’s versatile enough to eat with eggs, chicken, or honey. 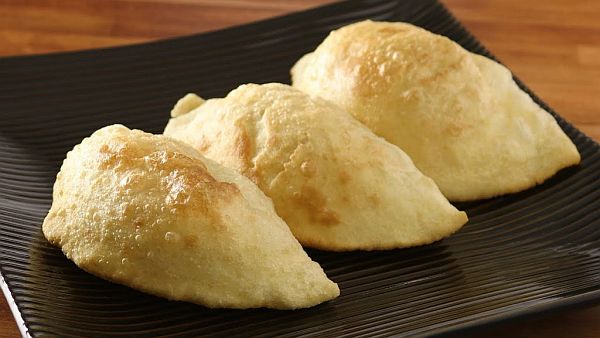 “Resembling mini puff pastries, fry jacks are wads of dough fried to a golden brown. While it remains unclear how they got their name, fry jacks are cherished by Belizeans,” says the recipe post on the Chabil Mar Villas site. You only need five ingredients plus the cooking oil, so no complicated shopping required to whip these up in your own kitchen. To make it really feel authentic, pair them with rice and beans, some scrambled eggs, and white unaged cheese if you have any.

See 10 more items from Belize you can cook from home here, most of them only using a handful of ingredients.

In much of Central America, you’ll run across more rice than tortillas, usually mixed with beans or some kind of meat to create a filling dish that can be cooked up in a big pot. Here’s a recipe for one of the most common ones, something you’ll see on menus throughout Costa Rica and Panama.

If you read through our reviews of luxury Costa Rica resorts, you’ll find a few reviews from our local contributor Samantha Wei. With her Costa Rican husband Yeison, she runs the top general travel blog for the country, My Tan Feet. What better person to ask for an authentic version of Arroz con Pollo: rice with chicken? 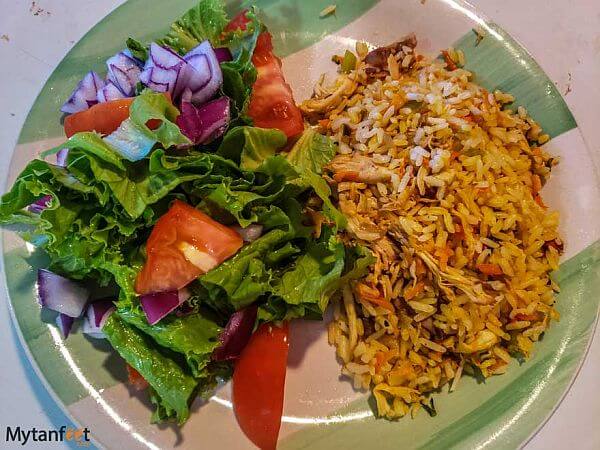 This is a staple of menus across the country, from humble roadside sodas to upscale jungle resorts. Locally it’s usually served with a so-so salad and oily fries, but of course, if you’re making this at home you can surround it with something healthier. Most ingredients are fairly common, but you may need to order some achiote paste and the salsa Lizano you’ll find on every home or restaurant table in Costa Rica.

Get the full step-by-step recipe here.

A Taste of Peru in Your Kitchen

We’ve got Peru to thank for most of the potatoes in the world and if you spend real time traveling around the country, you’ll taste more varieties than you ever thought existed. The other food item is getting less common in simpler restaurants though: quinoa. It’s gotten too popular for its own good, so export demand has meant less of it remains in Peru to end up on common tables. You’ll find plenty of it on the menus of restaurants at luxury hotels in Peru still, usually creatively combined with other fresh ingredients from the country.

Check out this video for how to make one of the most popular dishes, salterito de quinua as it’s spelled locally. You can play around with the ingredients and substitute since this is, at heart, a salad. Ideally though you’ve at least got some large-kernel corn, fava beans, onion, chile, white cheese, olive oil, and vinegar to get the right combination of flavors.

Or go here to see their recipe for Lomo Saltado instead, a stir-fried beef dish that I learned to make in a Peruvian cooking class in Lima with SkyKitchen. (We also learned to make Peruvian ceviche and a dessert–a yummy day.)

A Cool Ecuador Treat for the Table

Ecuador has one of the most diverse topographies and climates in the Americas. It contains mountains high enough to collect snow, thick jungles dripping with life, cloudforests, and beaches filled with palm trees–all within a few hours of each other by car. All those different climates mean they can grow just about anything in Ecuador, plus they’ve got a coast teeming with fish.

There are no tourists flying in to explore the Galapagos Islands by ship right now, but you can recreate your onboard experience with this coconut ceviche recipe from Quasar Expeditions. The one they sent me isn’t on their website and probably shouldn’t be since it’s meant to serve 26 guests and crew! For four people, figure you’ll need two green coconuts, about a pound of fish, and roughly a half cup of coconut milk. The rest you can adjust to taste. 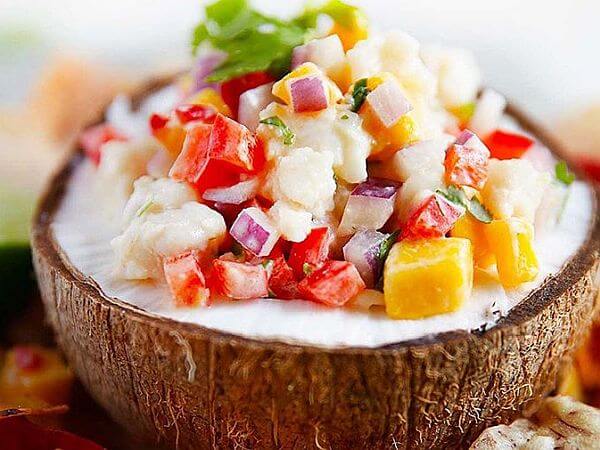 Clean and cut the fish in fine slices. Season the fish with salt, ginger juice, lime juice, coconut milk, and garlic paste then place in the fridge for 30 minutes.

Meanwhile, julienne the onion and place in water.

Blanch the red chili twice and then dice them.

Remove the coconut water from the coconuts and cut them open in half. Spread the coconuts on the table and fill them with the ceviche. You can leave them in the green husk or remove the inner coconut first (as in the photo above).

At the time to serve add some of the onions, small dices of chili, finely chopped coriander, olive oil, and microgreens. You can add mango if more sweetness is preferred.

If you want to get even fancier, there’s a recipe for spiny lobster ceviche on their blog. For dreaming about a future trip, see our tour story on cruising the Galapagos islands with Quasar Expeditions.

Little Brazil Bites on Your Plate

When most people in North America think of Brazilian food, we usually picture waiters walking around with giant slabs of meat on skewers, cutting off pieces to put on your plate until you cry, “No more!”

It’s a big country with a lot of cultural mixes though, so you may eat a big Italian buffet one night, a hearty seafood stew another, and then deep-fried chicken croquettes the day after that. Brazilians eat a lot of street snacks and small bites though, so here’s something that will probably bring back memories if you have traveled to Brazil.

The Brazilian cheese bread ball known as pao de queijo sometimes has more of a consistency of a cookie than a bread, but it is a common breakfast staple as well as an easily-found snack all day in most parts of the country. There’s even a fast-food chain called Pão de Queijo in Brazil.

The key ingredient is traditionally cassava flour rather than wheat, better known as tapioca flour in most supermarkets. As a result, these balls have the bonus of being gluten-free. Everything else you probably have at home already. 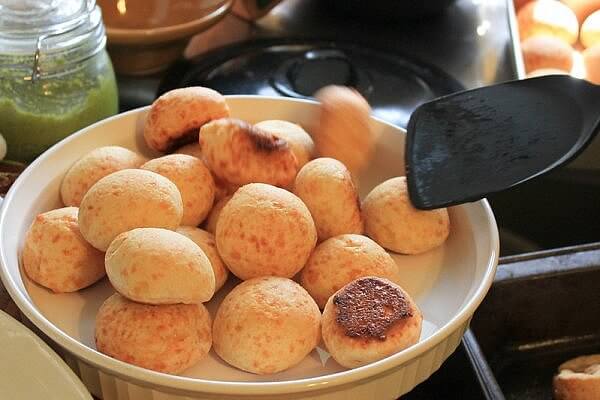 The cheese balls don’t taste quite like anything you’ve had before if you haven’t tried them, but most people end up downing the first one in a couple of bites and then reaching for more. Most recipes specify a certain kind of cheese, but the one we’re linking to here says “semi-cured cheese” and in reality it can be as mild as mozzarella or as strong as aged parmesan. Scroll halfway down the page after going to this link from Naya Traveler tour company to see the instructions.

A Taste of Argentina in Your Kitchen

Argentina is a very long country, ranging from a lush zone of waterfalls and the high desert around Salta down to the mountainous and sometimes freezing areas of southern Patagonia where you’ll find glaciers and high winds. In between are cattle-filled plains tended by gauchos and the big city of Buenos Aires.

The iconic Argentine dish is rather simple: a slab of beef grilled over hot wood coals, accompanied by a glass of malbec. You don’t need a recipe for that though unless you want to rub some chimichurri on it. Here are two more fitting recipes you can cook indoors.

Argentine Empanadas From House of Jasmines

When I last headed to Salta, Cafayate, and an adventure tour through the desert, this was my second time in the area. I joked on Twitter before I got there that I was going to eat 100 empanadas while I was there and I think I came pretty close. Right off the bat I learned how to make them too, with a cooking class at House of Jasmines Estancia Hotel in the countryside outside of Salta. I’ve had something called empanada in a whole lot of other countries, from Mexico to Chile, but the ones from Argentina are far superior to the rest. 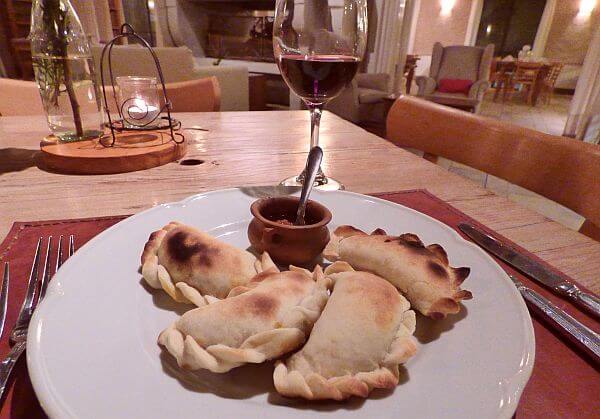 Head to this post to see the authentic Salta empanada instructions, or go to Naya Traveler’s site for a more detailed recipe for beef ones, but even in Argentina you’ll find a lot of variations. You can make cheese ones, vegetarian ones, or chicken ones and nobody is going to accuse you of not being authentic.

What you do need to do though is make the dough properly, flute each empanada properly to get the shape right, and bake the batch in a hot oven. If you have a pizza oven, that’s perfect, but otherwise, just bake until slightly browned.

We hope you enjoyed this tour of a taste of Latin America and get to try making at least one of these at home!

Costs and Where to Retire in Latin America