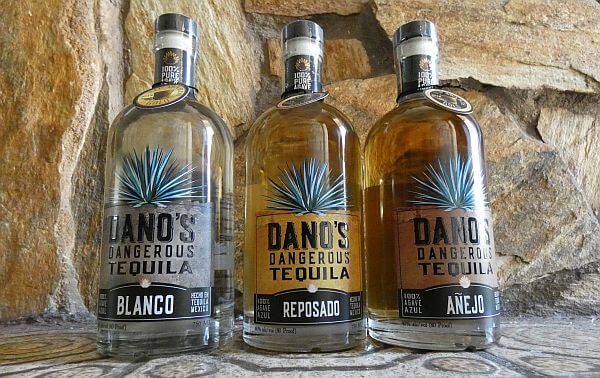 The founder of Dano’s Dangerous Tequila is a former traveling surfer who started out making tequila infused with pineapple and jalapeno peppers for his friends.  (We’ll check that version out in another post). The company eventually gravitated to the traditional blanco, reposado, and anejo versions though and it seems they connected with the right partners in Mexico. They’ve stacked up quite a few awards recently, including a gold at the World Spirits Competition in San Francisco.

Dano’s is based in Steamboat, Colorado, but its tequila comes from the town of Tequila itself, produced in the second-oldest tequila distillery: Casa Reyes Barajas. The fourth generation of the family is now running an operation that dates back to 1840. They stick to tradition here with brick ovens, copper stills, and blue agave that is at least eight years old—harvested at the height of ripeness. While commercial powerhouses like Sauza try to squeeze out every drop and rush the process, here the big piña fruits are slowly steamed for 26 hours.

In my taste tests, this care shined through in the finished product. While it’s nearly impossible to get a “bad” tequila if it’s made from 100% blue agave, there are clear differences when a producer doesn’t try to over-improve on tradition. Dano and CEO Chris Timmerman knew enough to trust the Mexican family to make the best tequila they could.

Usually when you do a tequila tasting at a distillery, they start you with the blanco version and end with the one that is aged the most. I did it backwards though over the course of several hours with all three, cleansing my palate in between. This was partly because the most expensive añejo version usually shows the most differences from one brand to the next, plus I was taking photos up front and I wanted some color in the glass.

If you haven’t tasted much tequila drunk neat, know that the añejo version spends the most time in the barrels aging. In the case of Dano’s, 18 months. Since it was aged in new oak barrels, there are no overtones from other spirits. Most tequila brands are aged in used bourbon barrels, though some may be aged in or something odd like sherry or cognac casks to mix things up. The maker says this one is aged in “virgin white oak barrels, so all you taste is tequila.” 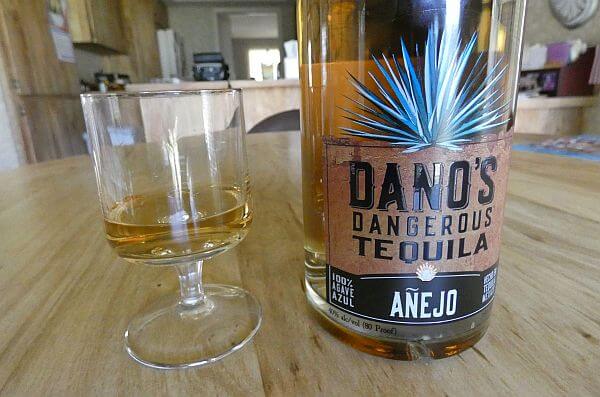 I love a good aged tequila and will often order this after a meal in Mexico. You never mix one aged this long with anything: it’s drunk neat like a good brandy, Scotch, or cognac. My first impression with Dano’s before I read the virgin barrels line was that this one was unique. The terms I would use for the tastes that hit your tongue are far from technical. I would use words like “juicy,” “tangy,” and “mouth-watering.” There’s a sweet citrus hit that mellows into tones of toffee and butterscotch on the finish, but with the brightness of the agave shining through all the while. There’s a pleasant aftertaste to savor.

The nose is rather mild, with no alcoholic burn and few hints to the flavor explosion that’s coming. But then there’s a citrus tang snap when it hits your tongue and a nice array of flavors as it rolls through your mouth. I usually prefer the brands from the highlands of Jalisco as they tend to be less harsh and more complex. This version blew away my expectations built on past experience though. It showed me that it’s possible to create a more nuanced spirit from the namesake town.

Highly recommended and a great value at the list price of $58. The bottle may not blow you away like one from a $200 bottle, but if you care more about what’s inside, this heavy glass one with a stopper will make you happy or impress your friends. It’s one of the few tequila brands I’ve seen that has won a double gold at both the World Spirits Competition and the SIP Awards International Spirits Competition.

As I’ve mentioned before, when you look at a supermarket shelf of tequila in Mexico, at least 2/3 of it will be reposado versions. Mexicans tend to use this version for drinking neat and fairly often for cocktails too if it’s not a premium brand. This is one I wouldn’t waste on cocktails (go to the blanco for that), but it would hold it’s own if you must.

The reposado version seemed to have the strongest nose to me, then there’s a nicely rounded first impression with just the right hints of flavors imparted by the “rested” time in oak barrels. A little toffee, a little almond, but mostly a more subdued version of that sweet tangy citrus flavor that shines through all of these, with a hint of tart berries that blends in well as the spirit moves across the taste buds.

There’s a lot going on in this complex tequila and it shows in the pile of awards it has won the past couple years of its short life, including some golds and double golds.

I sipped a glass of the blanco to try it out and this was one of the smoother ones you can do that with. Only a few people prefer blanco (sometimes called silver) tequila as their sipper. With no aging, you’re drinking what came straight out of the still after two times through. In one sense this is the purest form of the liquor since it’s not altered by touching wood, but it can come off as too much of a good thing on its own, without any mellowing. So most of the time, the unaged tequila goes into cocktails. 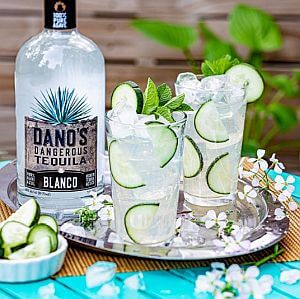 This blanco from Dano’s Dangerous is full-bodied and flavorful, but has a nice lingering finish after the first alcohol hit blows out. You get full-on agave sweetness with lots of citrus flavors and some metallic overtones that balance it out well. It tastes like a serious tequila, without any flavors that shouldn’t be there.

It holds up well in cocktails though, with enough heft to shine through and remain the star of the show. I’m using one of the shots from Dano’s Instagram feed since it’s prettier than what we made at our cocktail hour. That one is simply club soda, lime juice, and tequila with sliced cucumbers and a sprig of mint.

The cocktail I frequently make may or may not have a real name, but here it is. Combine 2 jiggers of tequila, 3 jiggers of pineapple juice, and a quarter to half squeezed lime (to taste) and pour over ice in a tall glass. Fill the rest of the way with club soda stir, and garnish with a lime if desired. Be careful because it goes down easy! If you’re in a hot and humid climate, you may want to salt the rim first or do it with Tajin for a real Mexican touch.

The blanco version lists for $48 and the reposado for $53. You may find them priced for less at your local liquor store. Or you can order direct from Dano’s Dangerous in Colorado and get free shipping on three or more bottles. Get a four-pack for $189–less than one bottle from some pretentious brands that don’t score nearly as well in blind judging competitions.