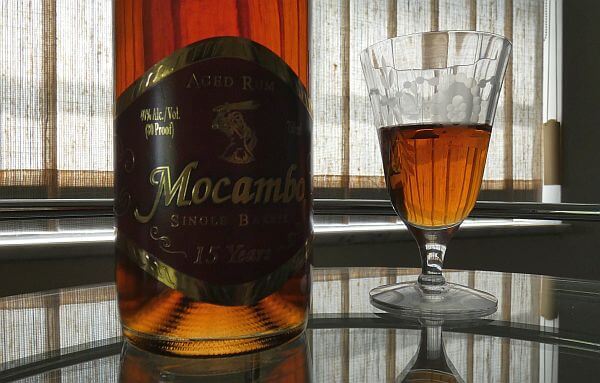 Sometimes I have to leave Mexico to try a new Mexican rum and that was the case when I stumbled upon Mocambo Rum from Veracruz. I did a double-take when I saw this single barrel aged rum on the shelf at a Total Wine store in Florida since I’ve never seen it once in Mexico.

I’ve reviewed a few other quality Mexican rums on this blog but apart from not-so-great Ron Probibido, I haven’t seen any of them on the shelves consistently in supermarkets or liquor stores. Perhaps the domestic market just doesn’t go for sipping rums too often and they’d rather spring for a Don Julio tequila, a brandy, or an imported Scotch or Bourbon. Rum has long been an inexpensive liquor you buy for making cocktails at the beach here, so maybe the home players have a tough time convincing people it’s worth paying for quality. (The cheap Mexican brands that aren’t aged long go for as little as $5 a liter.)

Rum aged for 15 years or more can be a tricky thing. That’s a whole lot of time absorbing wood flavors if aged at sea level, which is why the Zacapa rums are aged in the higher mountains to enable them to stand up to 23 years. Plus they’re blended in the solera method, so in reality only a fraction of what’s in the bottle aged that long.

Mocambo 15-year rum is really aged 15 years, then is marked “single barrel” on the label as well, meaning no blending. We can only guess about the past life of those barrels though since the company website just says, “old European white oak barrels.”

The company behind this rum is Licores Veracruz, which has been around for 64 years and makes a wide portfolio of spirits, including coffee liquor, mezcal, and novelty tequila in a gun-shaped bottle. (A hit with the cartels I’m sure…) They export to 28 countries and Mexicor of Houston brings this brand in. Sugar cane grows by the ton in Veracruz though, so they don’t have to go very far to get the raw ingredient for rum.

My first impression of this rum aged 15 years was mixed. The nose was pleasant and composed, without the overriding alcohol whiff you get from the cheap versions. My first thought after the first sip though was “prunes.” It’s not that this is an unpleasant taste and it’s common with lots of fortified wines like Tokaj, sherry, or port. So while I pondered whether this rum was aged in used barrels from one of those European products, I swirled it around and enjoyed some of the more common aged rum overtones like caramel, tobacco, and spices. The finish was pleasant and lingering, a nice blend of flavors. “Not terrific, but not bad,” was my first impression.

Then I snapped some photos for this post and moved everything in another room when I was finished. When I started sipping again, it was like my glass had been replaced. With some time to breathe, Mocambo turned into a premium rum. The prune taste moved so far back as to be almost imperceptible and the more “standard” rum flavors took over, along with a little dark chocolate. It all blended together harmoniously and my fears about this being too long in oak barrels went away. 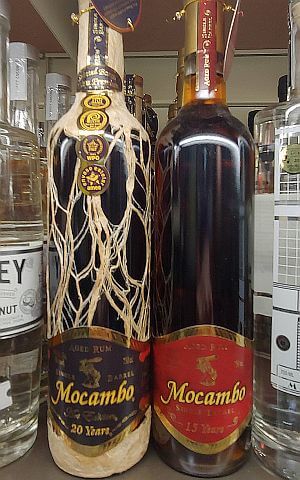 On this next round, one sip turned into many as it left me wanting more instead of setting the glass aside and forgetting about it. The nose was the same as before, though a little sweeter, while the taste became more balanced and confident. Apart from a little more alcoholic burn than I’d like when it first hits the tongue and a bit more tang than usual on the finish, there’s not much to complain about here, I wouldn’t give it an A, but it holds its own with others in this same price range from the Caribbean at least.

At a price of $26 where I bought it, you wouldn’t even have to feel too guilty using this for cocktails. That’s probably a waste though if it’s something more complicated than club soda and lime. For fruity drinks or a dark and stormy, you would be wasting the balance and complexity of a fine aged sipping rum that took a long time to get to your mouth.

There’s also a 20-year version in a more interesting bottle surrounded by Amate tree fibers, each a bit different and numbered, but you’ll have to check that one out yourself. It was 50% more than the 15-year one and I wasn’t feeling like enough of a gambler to take those odds. My guess is you’ll get more of whatever kind of barrel this is in, which may not be a good thing.

Either way, give it ample time to breathe and you’ll warm up to Mocambo.

If you want more of a sure thing, try to find Villa Rica 23 Años Gold Edition rum from the same company. After I put this post up, they won a “Superior Taste Award” for the sixth year running in Brussels, in a blind taste test. See the details here.