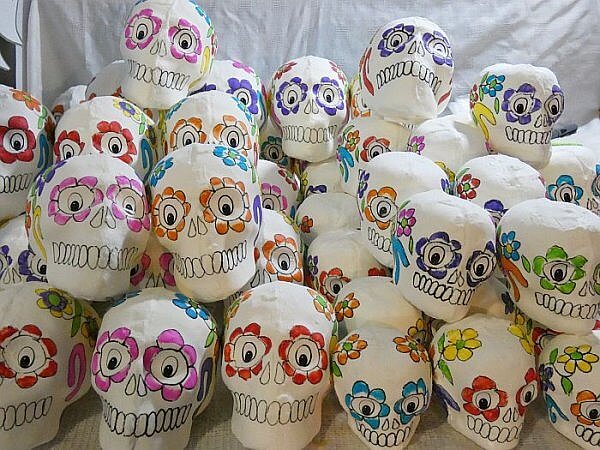 San Miguel de Allende in Guanajuato state may be best-known to Americans as the pretty Mexican city that often tops “best in the world” lists in glossy magazines. Others know it as the place where some friend or relative moved to for a sunny climate away from cold winters. At many times of the year though, San Miguel is a party town. The locals seem to grab any reason for a fiesta and with this also being a popular wedding destination, someone is toasting something every weekend.

Naturally, the current challenges around big gatherings as I write this are going to temporarily change how some of these events play out. The city reopened with strict protocols in place to protect the health of locals and visitors alike. That means some parades and concerts may be suspended or scaled back for a year. The film festival mentioned below will have its showings on outdoor screens. Consult the San Miguel Tourism official site or check in with your hotel concierge to get the current status.

Nearly every month of the year you may be visiting San Miguel de Allende there are events on the calendar: fiestas, parades, music events, and public holidays. Here are some of the major ones to plan a vacation around, starting with the month of Mexican Independence celebrations and the anniversary of the city.

The Mexican Revolution of 1810 began just down the road in another town when a priest named Miguel Hidalgo let out a shout of independence—El Grito—then gathered volunteers and headed to San Miguel. There he met up with the city’s now-namesake: Ignacio Allende. They gathered more fighters there and marched to Guanajuato City, where they surprised the Spanish troops and won the first battle of the eventual 11-year struggle for freedom.

Parties lead up to the big event at 11:00 p.m., when the mayor usually reads the proclamation of independence, patriotic shouts and music erupt, and then the fireworks go off with gusto. A night of noise and partying continues into the next day. Then there’s more music, dancing, a beauty pageant, and a parade on the 16th. Book well ahead for this most important day on the Mexican calendar. See our detailed reviews of the best San Miguel luxury hotels.

Split between the cities of Guanajuato and San Miguel de Allende, this is one of Mexico’s most important film festivals and it features a mix of domestic and international films, spanning from the obscure to famous directors like Terry Gilliam and Gus Van Sant. The 2020 version is adapting by having outdoor screenings instead of indoor ones and this year it runs from September 18 to 27. See the details here.

The Feast of San Miguel ArcÃ¡ngel – Last Weekend of September

The exact date of this moves around (it can sometimes hit in early October) and it’s kind of a combined celebration: the city’s birthday and its patron saint day. This is a locals’ affair that brings in villages from the surrounding areas who will party all night long. This is not a night for deep sleeping as the mojiganga giant paper-mache puppets roll into the main square at 3:00 a.m. and then the fireworks start. As the sky lights up there will be dressed-up dancers, huge flower displays, church processions, and performers.

Day of the Dead – Early November 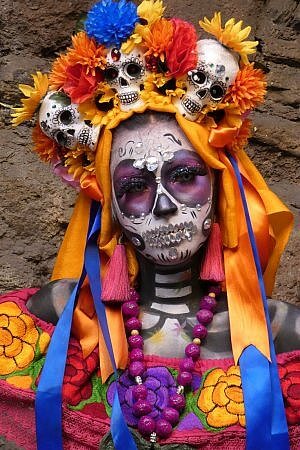 Day of the Dead, known as Dia de los Muertos locally, actually stretches over several days. These days it starts around Halloween, imported from El Norte, then goes into a day to remember children who died, on November 1. The main day to remember the relatives and ancestors who have passed on is November 2, when families gather at the cemetery or sit around an altar with photos, candles and the diseased’s favorite treats in the home.

The public parts of this observed by tourists can take many forms. Day of the Dead in San Miguel de Allende usually involves public alter displays in markets and government buildings, revelers dressed up in “Catrina” costumes and make-up, and some kind of a parade. Vendors are selling skulls of candy and chocolate, as well as tons of marigolds and alter decorations. It’s a photographer’s delight all around.

The San Miguel International Jazz and Blues Festival has been running since 1995, with performances happening in theaters, parks, and bars all around the city in mid-November. See this year’s info here.

With so many expatriates living in San Miguel, the U.S. holiday of Thanksgiving has caught hold here, especially in restaurants.

Christmas—Navidad—is a major holiday time here, but it plays out a bit differently in Mexico. The season really starts around December 12, which is the Virgin of Guadalupe day. Christmas day itself is not such a big holiday here and it will feel surprisingly low-key, with some shops open and vendors out as normal.

Christmas Eve is a bigger deal, a night when there may be a church visit but then there’s a late-night feast and party that goes on until the wee hours in most homes (with punch and tamales). It will be eerily quiet in the morning when children in the USA are tearing through their presents. The city will be dressed up for weeks with nativity scenes, lighted trees, and plenty of the poinsettias that grow well in Mexico. 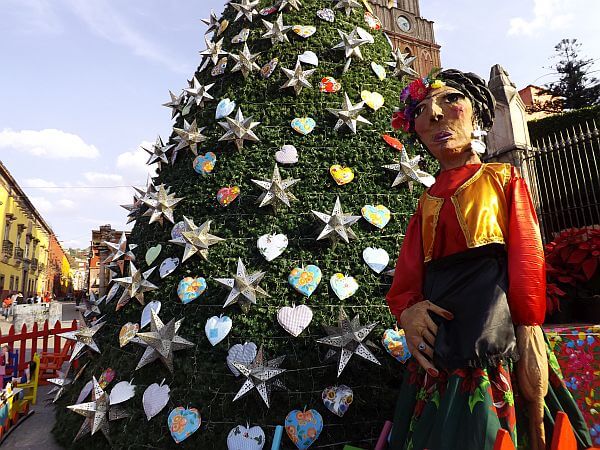 Although the American commercialism influence has worn off some here, the traditional day of presents for children is the 12th day of Christmas, in January, when the kings would leave small gifts in shoes left outside the door. The Epiphany or Three Kings Day is more celebrated than Christmas itself. There’s usually a parade on that day with three kings rolling through town on horses or even camels, throwing candy to the kids.

As in most places in the world, New Year’s Eve is an excuse for a big party. Reserve your table early if you are visiting San Miguel de Allende and want to spend it at one of the rooftop bars or restaurants with a view.

Easter week is a bigger deal than Christmas in Mexico, with nearly everyone getting at least a week off, school children getting two or three. Most families who can afford it take a vacation then and a fair number pack the hotels of San Miguel. Reserve as far ahead as possible the week before and after Easter. During this time there are processions, parades, flowers, and alters, with all the beautiful Spanish colonial churches dressed up inside for the occasion. Dates are in March or April depending on how the calendar falls.

One particular twist in San Miguel is that on Easter Sunday, effigies of Judas, politicians, and celebrities are filled with candy, studded with fireworks, and strung up across the main plaza. They spin, they shoot off sparks, and eventually they rain down sweets for the scampering kids. You might also get an egg cracked over your head—but don’t worry, it’s filled with confetti.

Dia de los Locos – Day of the Crazies in June 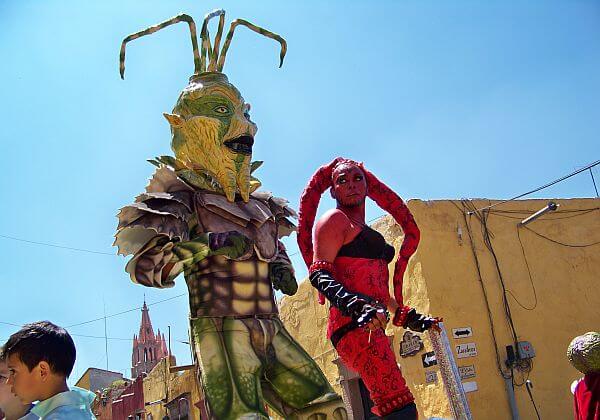 Day of the Crazies is the most exuberant and visually fun festivals you’ll find in San Miguel de Allende and it’s one that’s unique to this city. Happening on the Sunday closest to June 13, it’s a day with religious roots: it celebrates St. Anthony, the saint you pray to when you’ve lost something and need help finding it. So in theory this day is to give thanks to him, but it has evolved into a wild parade with crazy costumes, fantastic mojigangas figures, loud music, and tons of candy tossed out along the parade route. It feels like a Mexican version of Mardi Gras, with even more colors in the mix. Pick a spot away from the main plaza to avoid the worst of the crowds.

These are not the only local events and festivals, of course. Any month you arrive when visiting San Miguel de Allende there will be saint’s days, public holidays, and random reasons to celebrate and set off fireworks. Keep your eyes and ears open even if you don’t see anything on the calendar.

You can usually find more San Miguel de Allende upcoming events for your visit at the official tourism site.