I’m normally a guy who likes his spirits unadulterated and neat if they’re worthy of sipping, but I’ll gladly make an exception for this Dano’s Dangerous Infused Tequila. It is made with an infusion of fresh pineapple and jalapeno peppers and this is a match made in Mexican heaven. 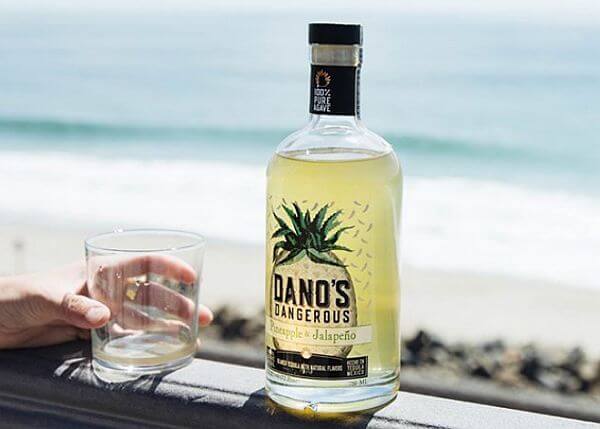 We already reviewed the award-winning blanco, reposado, and añejo tequila selections from Dano’s Dangerous and you can follow that link for our take on them. This infused version is actually part of the origin story of this brand though, the spirit that got the company started. First they made the party liquor, then they started getting serious, connecting with the family behind the second-oldest tequila distillery in the world. Thankfully the party liquor is still around and it’s not just a gimmick.

As a purist it’s easy to look down on infused spirits because they usually come in two versions: a) something that makes vodka actually taste like something with real flavor or b) a marketing ploy to get gullible young drinkers to order something new and pretty in a bar. In both cases, the profit margins are hefty and the ingredients are often a mystery.

Infused spirits are as old as spirits themselves, however, with traditions going back centuries or more in some places. Sure, sometimes they came about as a way to make inferior hooch more palatable, but other times they’ve created a magical combination that turns a ho-hum drink into something exciting. Tequila is already quite interesting on its own, of course, but the pineapple and peppers infusion here really creates a new taste sensation.

This tequila infused with pineapple and jalapeno peppers can serve two purposes. For cocktails, it’s a natural choice for making something interesting without being a mixologist. You’ve essentially already got three flavors going when you pour it over ice, so it doesn’t take much to turn it into a good cocktail. You can’t go wrong with just club soda and lime, but you can add something rather neutral like cucumber, add a little sweetness with juice, or enhance a cocktail with aromatic ingredients like mint or rosemary. You probably don’t want to add anything peppery though as this infusion already has quite a kick.

I didn’t experiment with adding any other spirits and it’s probably not a great idea, but you could substitute this for plain tequila in most cocktail recipes you find. Or it can make your paloma or margarita more interesting.

You can find some good cocktail recipes on the company website here. I need to try their “El Burro Loco” with ginger beer and their “Agave Maria” take on a Bloody Mary looks like it would be a real hit at brunch.

Where this infused version really shines though is when you drink it neat, either at room temperature or on ice. It works well either way. The agave, pineapple, and hot peppers really create a complex sensation in your mouth. They obviously got the proportions right over the years when creating the ideal mix. There’s the strange feeling though that the hot jalapenos kind of make you thirsty and if you’re not paying attention to how much you’ve ingested, you might start getting wobbly before you noticed that you’ve downed quite a bit of tequila. It has slightly less alcohol than a normal American standard, at 36%, but that’s not much of a difference and it goes down surprisingly easy.

There were only two of us drinking this Dano’s tequila but we polished off the bottle in what felt like record time. Be careful with this one because the Dano’s Dangerous Infused Tequila really can be dangerous to the unwary, especially for those who have a high tolerance for chili peppers.

This 100% agave tequila is a rare combination of quality liquor and additional ingredients that is not a step down from the original. The most devout tequila snobs may still turn up their nose at this combo, but if you taste it with an open mind you might decide three drinks in that this infused version is something special. Apparently plenty of judges agree: it won a double gold in the 2018 Sip Awards and then repeated the feat in this blind tasting in 2020, showing it certainly wasn’t a fluke.