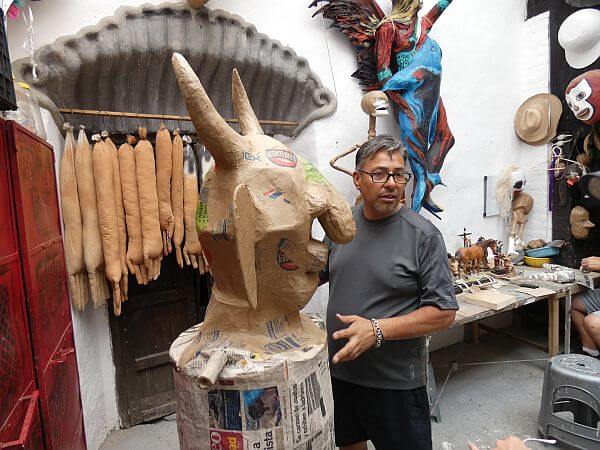 The City of San Miguel de Allende became a magnet for foreigners because of its art scene and the enthusiasm for the visual arts hasn’t faded. In a city that defines the term “postcard-perfect,” you can go on a guided art tour that visits some of the best studios, places where the artists make the magic happen.

San Miguel de Allende looked nothing like it does now in the mid-1900s. Back then, many would have called it a dumpy town, a sad place, a forgotten stop on a country road. Without much of an industrial base and no big draw attractions for tourists, it was a distant also-ran for both visitors and residents. Instead of grand restored mansions, there were many boarded-up buildings and crumbling structures. Then artists from abroad started coming to the city to study (many of them veterans on the G.I. bill), lured by the cheap living expenses, striking visuals, and pleasant year-round weather. Some of them started fixing up the old houses and never left.

That migration was small at first, but it built up over the decades as word spread. Along the way the artists were joined by retirees, those escaping the rat race, and a trickle of tourists that later turned into a flood. All along the way, the artists kept coming. They opened galleries and shops. They designed beautiful interiors in the restored colonial homes. They supplied the steadily wealthier patrons moving to the city with quality artwork to put on the walls of hotels, upscale restaurants, and palatial living rooms.

While you can see all of this on display when you visit San Miguel, it takes a bit of work to go behind the scenes and see any part of the creative process behind the curtain. You can take your chances at Fabrica la Aurora-a former textile factory turned into a fantastic multi-gallery space-but it’s hard to know when any artists will be there working and when they won’t. You may not feel right disturbing them either when they’re in the middle of creating a painting or sculpture.

One easy solution is to hook up with the right experienced art tour guide who has an arrangement with professional artists in the city. If you’re an investor or collector, you get private showings tailored to your tastes. If you’re a casual tourist just wanting to take a tour with no pressure, you can do that too-still tailored to your tastes. The best tour in the city for making this happen is Art Tour SMA. My wife and I spent a few hours with the founder and guide Arturo (Yes, a man named Arturo may have been destined to lead art tours. He also runs a gallery.)

An important part of the process is looking through the company website and seeing which of the examples speak to you. Arturo then lines up your tour based on your preferences categorized by paintings, sculpture, and textiles, for example. So if you love modern art but hate pretty watercolors-or love landscape paintings and are bored by sculptures-the tour will reflect that so you’re engaged instead of bored. He then sets up three or four visits to workshops that make sense, with a stop in the middle somewhere to indulge in some refreshments and maybe a glass of wine.

A Surreal Stop With Yui Sakamoto 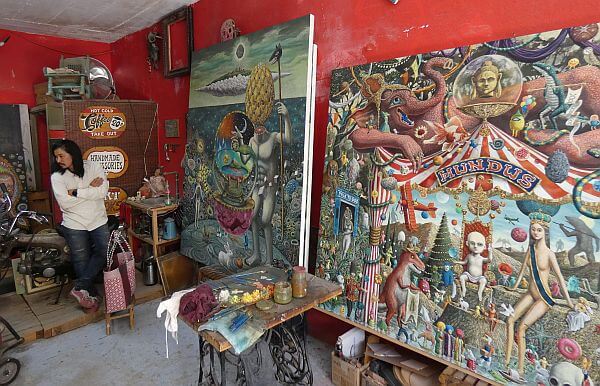 My first pick among the artists posted at Arturo’s site was Yui Sakamoto, originally from Japan and now living in San Miguel. His bizarre, surrealist paintings immediately drew me in and I was happy that his was the first stop on our tour. We arrived in a taxi because it is in a residential area off the beaten track, then entered his studio open to the street to see several works in progress.

His paintings are detailed, intricate affairs that don’t look quite like anyone else’s. You can’t really call them “dreamlike” since nobody has dreams this involved and symbolic. There are strange juxtapositions and religious nods mixed with pop culture. His work will either make you recoil or make you smile, but you probably won’t be indifferent. If you stay at Hotel Matilda, look up in the lobby to see one of his paintings on the wall. You can also see his work and make a purchase at the Interseccion Gallery at Fabrica la Aurora.

A Range of Media from Kathleen Cammarata 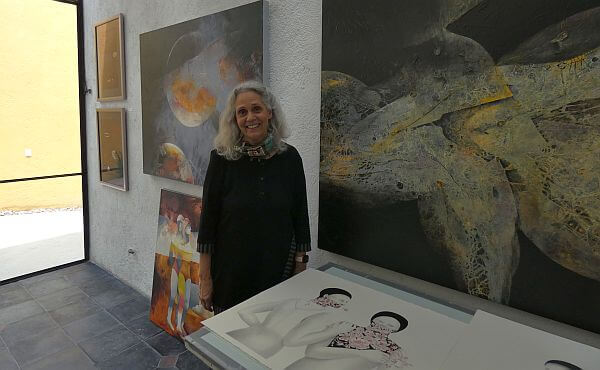 With 35 years of experience, Kathleen Cammarata knows her way around an art studio and she experiments with different forms to mix things up. We visited her custom-built studio designed by House and House Architects of San Francisco, an ideal place filled with light that’s in a great neighborhood for walking. She opens up her studio the second Sunday of each month, but we got to visit it privately with Arturo and spend some time talking with the artist.

She spent a lot of years working as an art teacher at museums in the U.S., but that was “a lot of work for not a lot of money” while she showed her work at 24 solo shows and more than 50 juried shows. Then she moved to San Miguel de Allende a decade ago and enjoys a spacious studio. It provides a great work space and houses her large abstract paintings, masks of flowers and other objects from nature, and whimsical, stylized colored drawings of costumed women on mylar. She’s clearly a prolific artist who can excel with a variety of materials.

We had some snacks as part of the tour while chatting, but passed on the wine since it was still feeling too early. We then hopped in another cab to go back to the historic center for a visit with a local legend…

If you’ve seen the James Bond movie Spectre, you’ve seen some of Hernan Arroyo’s work in the opening parade sequence in Mexico City. In the past, these giant paper-maché figures were never used in Day of the Dead parades in the capital or anywhere else, but in an example of life imitating art, now they are.

These mojigangas that go on the shoulders of people have often been used in other parades and fiesta celebrations, dancing around to music, and making people smile. Since San Miguel de Allende is a major wedding destination for Mexicans (the photo backdrops are certainly ideal), these giant figures often figure into the wedding procession and reception, a big bride and groom making their appearance in the crowd. Hernan and his crew sometimes get commissioned to do custom figures that look like a real person, but more often they’re renting already made one out that they have stacked vertically in the back like in a storeroom in Westworld. 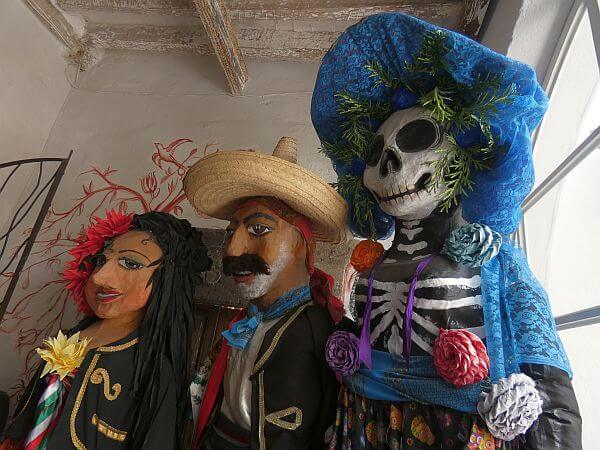 Hernan explained to us a bit about his background as he showed us around: he’s been making these for 35 years, starting when he was 7 and his godfather taught him. Originally, he says, the mojigangas were just used in religious processions, then they made the leap to religious festivals, then secular ones. Although they started in this region, they have spread to other parts of the country and he gets orders to send them to Oaxaca, the capital city, and beyond. They use discarded cement bags and newspapers over a frame for the body and head, then attach arms that were disconcertedly strung up on the wall of the workshop we visited. They then add clothing, ribbons, glasses, fake pearls, rhinestones, plastic flowers, glitter, or whatever else is needed to complete the effect.

After buying a few (smaller) things in the adjoining shop, we said goodbye to our guide Arturo, promising to catch up with him the next day. We stopped by the Manuk Gallery where he works and toured the rest of Fabrica la Aurora to round out our tour of the art scene of San Miguel de Allende.

For more information and to book a tour, see the official website here. 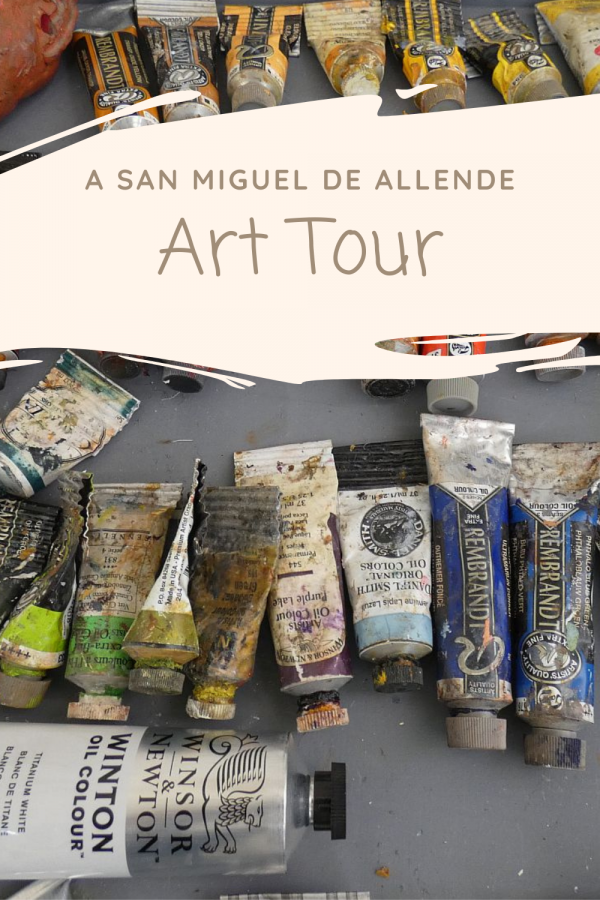