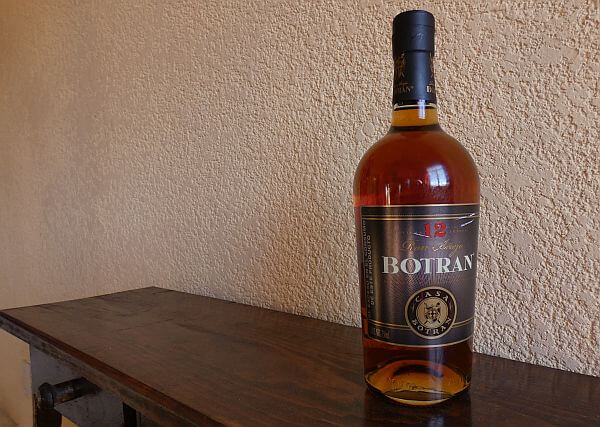 I’ve sung the praises—to whomever would listen—about another fine rum from Guatemala that’s better known than Botran, but apparently they’re doing something right in that country as this one is excellent too.

Is Guatemala big enough to support two rum distilleries? Actually no: both this brand and Ron Zacapa are part of the generic-sounding Industrias de Licoreas de Guatemala. They do have separate websites though. That one will take you to the Zacapa brand now, while this one goes to Ron Botran.

The Botran family has been making rum since 1939, but I have to confess I’d never seen this label outside of Guatemala until I visited Miami in 2012 and saw it on several billboards and bus stop ads. Since they were obviously putting some resources into getting the word out in the U.S., I bought a bottle in a downtown liquor store to see if it was worth talking about.

Indeed it is, so I’ve bought it several more times since.

Situated somewhere between the liquid caramel of Centenario rum from Costa Rica and the heavy bite of Flor de Cana from Nicaragua, Ron Botran Añejo Reserva offers a nice blend of smoothness and complexity that makes it fine to drink neat but not overpowering if you use it in a (good) cocktail. It hits all the right notes you’d expect from a fine Central American rum: toasted caramel, vanilla, spice, and a long, pleasant finish.

Those with a refined palate might taste almonds and some tropical fruit overtones. With a warm copper color and a medium body feel in the mouth, this is a rum you could sip for hours. If you bought this in the ’00s it would have the Zacapa label on it instead and the 12-year version of Botran is basically Zacapa 23 aged half the time. There is a slight variation in when the sugar cane is harvested for the two brands, but it would take a professional reviewer who does this for a living to tell how much difference that makes I would imagine.

Guatemalan rum is aged in the highlands, not at sea level like most Caribbean brands, so it can benefit from longer aging (and not taste like a stack of firewood or a pair of boots). To my taste, that makes this distillery the king of all rum makers, something borne out often at spirits contests and customer ratings both.

This is a complex rum with a pleasant aroma to start, a rolling cavalcade of flavors as it moves across the taste buds, and a lingering, pleasant finish at the end. The Zacapa/Botran distillery owns its own sugar cane fields, which can’t hurt in terms of quality, plus they typically blend barrels together rather than separating those into different products. From what I can taste, this is a good strategy. Think of this then as the sister version of Ron Zacapa, with just fewer years in the barrels.

Oddly, you’ll find this marketed with a variety of numbers on the label, anywhere from 12 (what I usually see in Mexico) to 18 (the highest one for this brand). You’ll think that corresponds to the number of years it has been aged and you’d be partly right. But since this distillery blends a wide range of barrels together in the solera method, you really have to take it on faith that the 18 version has more aging than the 12 version. Anything up to 14 says it’s aged in barrels “for 5 to 14 years” and the higher numbers just add more to that range.

I did have the Botran 15 version years back when I was in Guatemala and I’m guessing I could pick that out over the 12 version I have in my house now, but I doubt the difference would be dramatic. If you see different versions on the shelf and there’s a massive difference in price, I’m not sure the additional years are worth the premium since it’s a blend. You just might get a slightly nicer bottle. All of them are tasty.

The price tag will often be a happy surprise though. Ron Botran Añejo Reserva 15 retails for $25 or so (my bottle was $19) in the U.S., making this one of the greatest bargains you’ll find in the rum section or your liquor store—if they have it. It looks more expensive than this, plus it certainly tastes more expensive than many others in this range from the Caribbean. If you see an 18 version it might go for $35 or so, but that’s the top of this brand’s range.

Botran Reserva 12 also retails for about $20 in a Mexican supermarket, priced somewhere between the Mexican, Cuban, and Jamaican brands and the higher-priced sister Zacapa or a Flor de Cana of the same age. So no matter where you are in North America, Ron Botran Reserva rum is a great find.