After a too-long drought of staying away from planes and airports, I boarded an Aeromexico business class flight this week, direct from Mexico City to Orlando. In these times when we’re being extra conscious of distancing from our fellow passengers, this was a dream flight that made me feel much safer in the air. 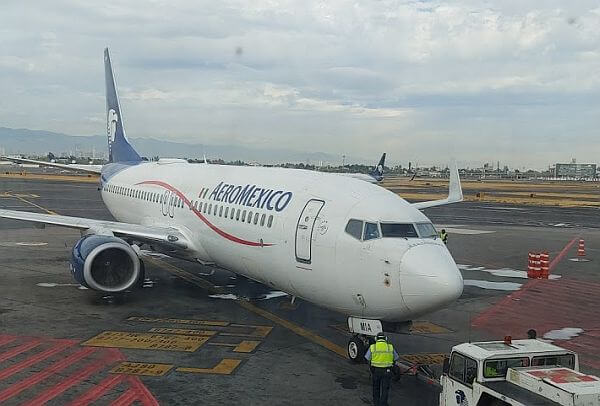 Aeromexico (or Aeroméxico if you’re reading it in Spanish) is the only carrier based in Mexico offering true business class seats. It once had competition from Mexicana, but now its only full-service competitors are legacy airlines from the USA, Europe, and elsewhere in Latin America. This airline gets a slight edge compared to most U.S. carriers in all sections of the plane, but I was quite happy with the business class experience on this flight in this time of heightened precautions.

It was me, my wife, and my daughter on this flight for a price that was quite reasonable—less than 50% more than the economy class price. So I snagged these “Clase Premiere” tickets as soon as I saw them. When demand is low, it pays to check all your options before booking as there are some terrific deals out there for the front of the plane in Latin America. Here’s how it went from start to finish.

Checking in and the Aeromexico Lounge

You actually get to check two bags per person if you want in business class, so this is a great option if you’re moving to Mexico or you’re bringing a whole season’s worth of goods with you at snowbird time. We only checked one each, but that still meant waiting in line with everyone else in Mexico City’s T2 terminal. There was no separate line. It moved quickly though thanks to an ample staff and we were soon on our way to security.

Because we had biz class boarding passes in hand, we were able to use the Aeromexico Salon Premiere Lounge. Even though I have Priority Pass, I’ve been avoiding airport lounges since the Covid-19 virus took hold and had some trepidation about hanging out in this one. The seats are spaced much further apart than they used to be though and this lounge in the Mexico City airport has an upstairs “family area” also. So we didn’t have to be within six feet of anyone except the waiter who came by to see if we needed anything. 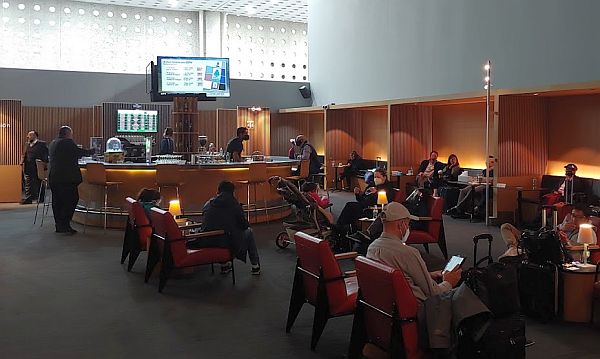 Absolutely everything was individually wrapped, which makes people feel better but it’s generating a mountain of plastic garbage. At least I got to use a real coffee mug.

The food selection is just snacks these days, with mostly sugary items and junk food, but I did find some plain yogurt and nuts to feel somewhat healthy. The drink selection was truly outstanding though, including craft beer, yogurt drinks, many sodas, and coconut water.

In normal times, business class would board first, but the airline is smartly booking back to front now to avoid extra contact between passengers. There wasn’t a lot of distancing in line, but everyone was properly masked up. We were happy to be the last ones to board, coming on at the end and taking our seats. They started with Group 5 (the back) and ended with Group 1 (the front). Announcements were in Spanish and English. 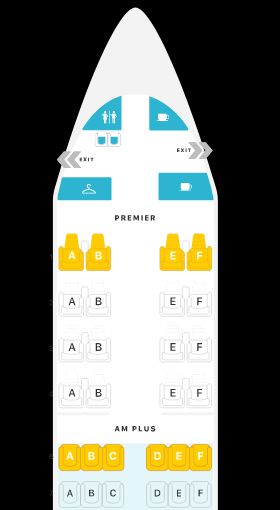 This was still breakfast time when we boarded, so they came around with juice and water before take-off. As we settled in I found that we had seat-back entertainment systems, comfy leather seats with decent but not overwhelming legroom (SeatGuru says there’s a 39-inch pitch). Seats have a leg rest that pops out. There was also a USB charger by the screen. As you can see from the map here, it’s a 2/2 configuration on a Boeing 737-800 plane, so a standard four seats across and a wide aisle.

After we were in the air, the bilingual flight attendant came through taking drink orders. It was too early for most to drink anything alcoholic, but spirits, wine, and beer were available. The coffee I had was decent and we got to choose what we wanted from a basket of snacks, with similar items to what was available in the lounge. I’d imagine there’s better food in non-pandemic times.

The seatback entertainment selection was good, especially for movies, with a mix of classics like Casablanca, fairly recent titles (I watched Ready Player One), and releases from the past year. There was also a mix of TV shows and music channels.  WiFi is complimentary in Clase Premiere, activated by a QR code.

There was no amenity pack on this route, though in all fairness we didn’t really need those items for a flight of three hours. 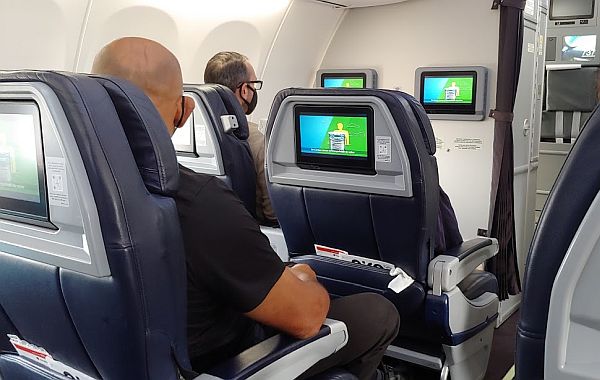 Exiting the Plane and Luggage Pick-up

Once our Aeromexico flight landed and taxied to the gate, Clase Premiere passengers were the first ones to depart. So again, upgrading to the front brought an extra layer of healthy security. This also meant we were first in line at immigration (no Global Entry since my daughter doesn’t have it) and we breezed right through.

Because our luggage was tagged as “Priority,” business class passengers’ luggage was in the first round to come onto the conveyer belt. We got ours quickly, exited customs and then…waited in line at one of Orlando’s notoriously backed-up rental car counters. Oh well, the elevated experience was good while it lasted.

Because Aeromexico is a Skyteam partner and closely aligned with Delta, we earned Delta miles on this flight. Since Delta is the only U.S. carrier besides Alaska that is currently blocking middle seats throughout the plane, those are the best miles to earn right now.

Your actual seat comfort on your own Aeromexico business class flight depends a lot on which plane you’re on, and with 11 different models in use, it’s hard to know what you’ll be on until you look it up. The smaller Embraer planes (used more on domestic routes) are the usual claustrophobic tubes and are at the bottom for seat pitch. TransAtlantic flights to Europe on the Dreamliner are a different story, with a 60-inch pitch in the front of the plane, electrical outlets, and real meals.

Overall, I’ve been satisfied on economy flights on Aeromexico, though they’ve gotten stingier with luggage in recent years and you often have to go through their Mexico City hub. I would definitely book business class with Aeromexico again (Clase Premiere) and will see if lightning can strike twice on scoring the great value we did this time around. Check your own route’s prices here:

Flying to Belize This Winter Season