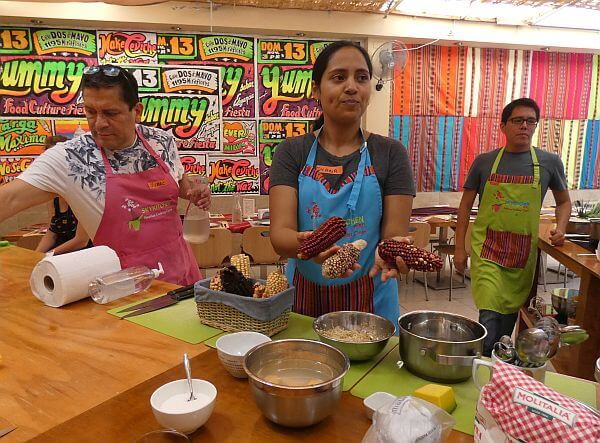 Ask any well-traveled foodie who has spent a lot of time in Latin America which city is tops for cuisine and there’s a good chance they’ll bring up Lima, Peru. As you see on the annual list of the top-50 restaurants in Latin America, Lima is usually duking it out with Buenos Aires for the most entries.

Sure, Argentina has great beef and Chile has an array of fantastic wine, but if you want to consistently be thrilled and surprised with your restaurant meals, Lima is the hands-down winner. It’s got the best collection of talented chefs, the most unique dishes you won’t find elsewhere, and it has become the kind of place chefs from other countries come to study in.

I think I’ve only seen the sun about 10% of the days I’ve been in Lima, so maybe that’s why the country has such great food. Might as well stay inside and cook! Seriously, because of the weather and the wealth of attractions elsewhere in Peru, Lima doesn’t get many tourists who stay more than a night or two. If you’re one of them that does, make some restaurant reservations and do what I did last time I was in the city: take a cooking class.

My guides for a day of varied eating and cooking were SkyKitchen Lima and I would definitely recommend their Peruvian cooking class experience. One of their dedicated facilities is on a rooftop terrace, so you can be distanced outside too if you’re going there soon. 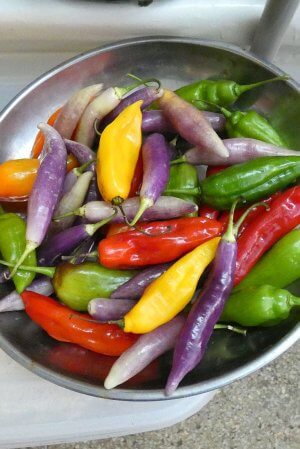 We started out with a visit to the market so we could see Peru’s wealth of fruit and vegetables on display where locals go shopping. City markets are always fun and colorful and this one in Miraflores was no exception. Some of it was appetizing and some of it wasn’t once we got over to the once-living creatures section. There were the usual stacks of fish and mollusks, plucked chickens hanging by their feet, and rectangles of fatty pork with the skin still on it grilling over charcoal.

The other sections had cobs of black corn, home-made chicha for $1.20 for two liters (in refilled Inca Cola bottles), beautiful peppers, passion fruit, and too many kinds of potatoes to count.

When we got to our cooking class location, we started out with a fruit tasting, which was quite involved. In some cases, there were two or three kinds of the same fruit (mangoes, bananas) so we could compare them side-by-side.

After that we turned to liquid–making Pisco sours we could sip on while we were busy preparing our three courses. Pisco has never taken off on the international stage, but it’s everywhere in Peru, so it was fitting to drink some while we were chopping and cooking.

We then got busy chopping fresh fish, squeezing limes, and chopping peppers to make Peruvian ceviche. We learned that there are dozens of different recipes for ceviche in Peru and yes, it’s okay to use frozen fish back home as long as you’ve given it time to fully thaw. We mixed in garlic, sliced habanero peppers, sliced red onions, salt, and pepper before garnishing with big corn kernels and fried slices of sweet potato. After that, I could say, “I made this!” when I took the photo. 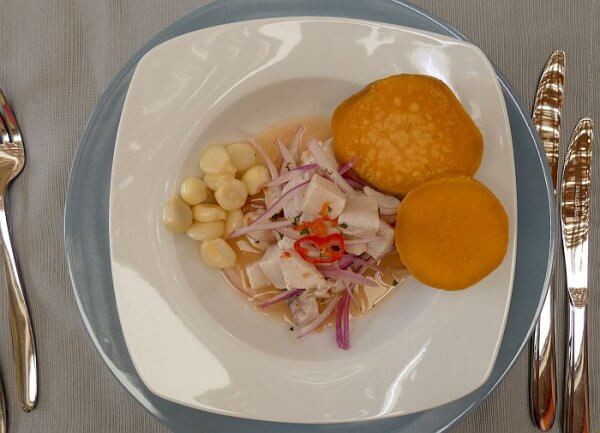 Then we moved on to the main dish, one that shows why Peru has such diversity in its cuisine: lomo saltado. This tenderloin stir-fry was introduced by the numerous Chinese immigrants who lived and worked in this port city throughout its history. The Peruvians kept the traditional rice accompaniment but added their own starch as well with fried potatoes, better known as French fries.

We marinated the beef in vinegar and soy sauce, then combined the pieces in a stir-fry with tomatoes and onions we had sliced. Separately we fried potatoes and then placed those and a helping of rice on our plates. 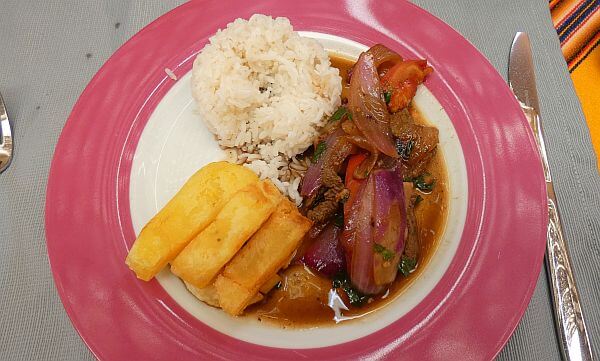 We were getting quite full at that point, but we needed to make room for dessert. The deep fryer was ready for the doughy street food snack favorite: picarones. These are sometimes called “Peruvian funnel cakes” since they’re basically deep-fried dough, but they’re usually made with a mix of sweet potatoes and pumpkin, so you can tel yourself they’re a tad healthier.

The class usually includes a dish called causa rellena as well, something we had to skip because the size of our group. I’ve had it in restaurants though and it’s delicious: it’s mashed potatoes with lime and chili paste stuffed with chicken and avocado.

See more details on SkyKitchen Peru’s market tour and three- or four-course Peruvian cooking class here, with prices. That full one is more than five hours, so if you can’t spare that much time, you can book the fruit tasting and cooking class by itself without the market tour.

A Tour of Lima With a Helping of Food

A few years back, one of our writers recently went on a culinary tour of Lima to eat his way around Peru’s capital city and get some lessons on the various aspects of the cuisine. Part cooking class, part ingredient education, and part pure enjoyment of good food, this tour from company Lima Mentor hits all the culinary bases.

If you’d like to explore the food and drinks of Lima and see what makes this city worth more than a quick stop on the way to Cusco, this article will open your eyes to the possibilities and tell you who to turn to in order to do the same tour yourself.

See other stories on luxury tours in Peru.

Our Most Popular Luxury Tour Stories From Latin America
Share it!