Sotol is a Mexican spirit that has flown below the radar for many years, but this interesting liquor is popping up in more places lately and I just got to try a new entry from IZO, a distiller out of Durango state.

Many visitors who have vacationed in Mexico have tried some good 100% blue agave tequila sipped neat and realized it was a wonderful thing. Over the past decade, more have tried its smoky cousin mezcal as well. Once you get past those two homegrown Mexican liquor options, however, only curious drinkers in-the-know have worked their way down the list to bacanora, racilla, and sotol. This is partly because the root plants are not cultivated on huge farms, so quantities of what can be distilled and bottled are far lower.

The Sotol Plant and Liquid

The sotol plant grows wild in a region extending from Durango up through the southwestern USA, the area of the Chihuahua Desert. The state of Chihuahua is actually the best-known origin of distilled sotol and we touched on two brands from there in this earlier blog post. We first sampled it after a day of riding the El Chepe train through the Copper Canyons. 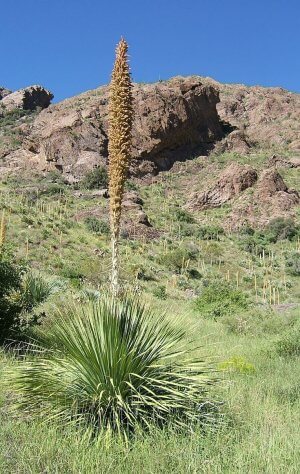 The scientific name for the plant is dasylirion wheeleri and it is part of the same family as asparagus. It differs from the agave plants used to make tequila and mezcal in the sense that there’s no actual fruit that’s harvested and roasted. Instead, the liquid core of the plant is what ends up in the distillation process.

You have probably seen a sotol “desert spoon” plant whether you knew it or not. It’s a common feature of xeriscape gardens in the southwest, those beautiful naturalized landscapes that use native plants instead of grass since grass and traditional shrubs require a huge quantity of water to stay green. The version found in U.S. garden centers is a bit different (and smaller) than what grows wild in Mexico, however. The wild ones can reach five feet tall, with the flowers extending another 15 feet more into the air.

The “wild” part is important: with one bottle of sotol requiring one plant and that plant not being cultivated in quantity, this spirit is never going to be a household name on every bar shelf.

IZO was founded by Durango native Gaston Martinez and the company is best known for its mezcal. More on that in a moment. Durango has plenty of sotol plants growing wild in the state, however, so it made sense that they would eventually turn to this extension. They consider their output “handcrafted spirits” and then employ some admirable green practices in the production. They use lava rocks and local fallen oak in the baking stage, then their bottles are topped with an onyx stopper cap from the area. (Meaning no two caps are exactly alike.)

A sotol desert spoon plant takes more than 15 years to mature, which is about a third longer than the already-long maturation for the agave plants used in tequila and mezcal. Each one is hand-selected for harvesting and distillation at the ideal time, then processed using traditional methods.

While the company has its heart and production in Durango, Mexico, its office headquarters is in San Diego, California. So depending on what distributors are active where you live, you may be able to find it in an American liquor store.

Izo Sotol is 47% alcohol, so it packs a punch. This is also an unaged spirit, meaning it hasn’t spent any time in oak barrels to smooth out the edges. If you’re someone who likes to sip silver (blanco) tequila or unaged mezcal, you’ll probably warm right up to it, but if not, you may prefer to use it in cocktails instead. 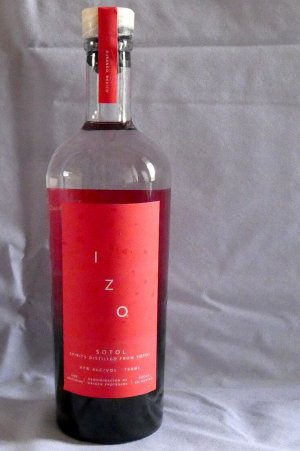 The initial nose reminded me more of pisco than the usual Mexican spirits, with a funky fruit sweetness layered beneath the strong whiff of alcohol. This continued on with the first impression, with a taste sensation more like something distilled from grapes or plums than an agave fruit.

Once it moved across my taste buds more, however, there were more hints of citrus and a mild but not overpowering smoky taste lingered around the edges. It’s hard to get but so much depth in a white unaged spirit, but this sotol has a good bit going on that will keep you coming back for another sip. The finish is quite tangy and that’s where it more closely aligns with its tequila cousin.

For me, however, most white spirits don’t hold my interest enough to go back for seconds. Even ones adulterated along the way, like gin and vodka infused with fruit, are hard to sip for hours. While this is a pleasant–though powerful–spirit to drink neat, I think I’ll enjoy this EZO unaged sotol more often mixed with other ingredients.

For cocktails, you can substitute sotol in any recipe calling for tequila and give your drink a different twist. Sub it for mezcal too and experiment. For some ideas, here are some sotol cocktail recipes from Imbibe Magazine if you’ve got a well-stocked bar in your home with lots of ingredients.

The website for this company is Izomezcal.com, which gives you a sense of what they’re best known for. Their Mezcal Joven has won medals in the blind tasting spirits competitions in San Francisco, San Diego, and New York. 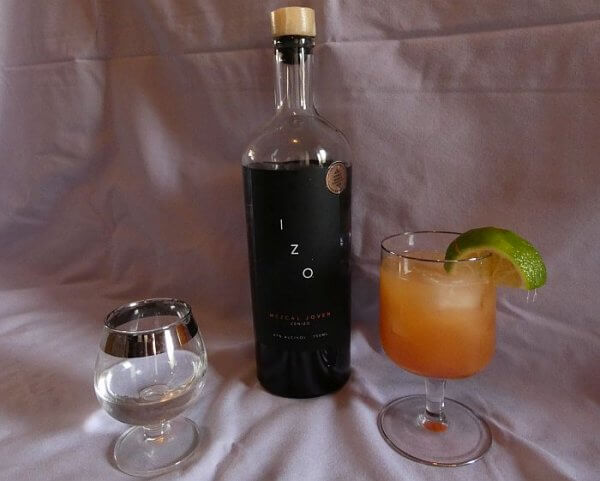 For mezcal, I tend to gravitate toward the ones with less smoke and oiliness unless I’m mixing a cocktail. It’s just not the ideal taste profile for my palate. I thought I’d give this one a try though and see how it compares to others I’ve tasted since I’ve tried dozens of them, sometimes back-to-back like at the Gueleguetza festival in Oaxaca.

To my taste, this IZO Mezcal hit all the right notes when drunk straight, so if you’re already a fan of the spirit you’ll be happy with the full-bodied flavors of this one. If if you want something smoother, seek out the aged version. This joven (young) version is terrific in cocktails though, of which we mixed up several combinations to see how it blended with different mixers. It held up well when combined with tamarind, pineapple juice, mango juice, and lime—all powerful tastes to compete with. It added a dark and smoky element to offset the citrus and sweetness and worked really well with something both tart and sweet like tamarind or cranberry.

See more at the company website and look for this brand if you happen to be in Durango, San Diego, or where there’s a good selection of spirits beyond the norm from Mexico.

Four Mexican Spirits That Are Not So Famous