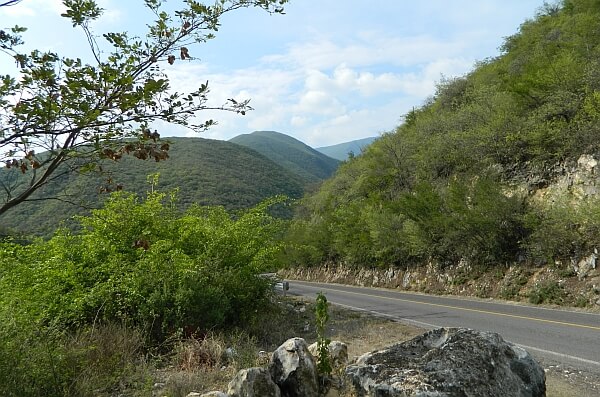 Renting a car in Mexico and driving yourself is a bad idea in many large Mexican cities, but it’s a great idea if you want to go exploring a region on your own schedule. Once you get away from the congestion of a place like Mexico City, you can see a lot more when you have your own vehicle out on the open road.

I’ve been traveling to and living in Mexico for about 18 years now. I had a beach house in the Yucatan Peninsula and we would rent a car as a family every time we visited, then I’ve gotten one when I’ve gone on a road trip from my current base of Guanajuato because it’s a mostly pedestrian city where you don’t need to own a car. Beyond that, I’ve gone through the car rental in Mexico process in a lot of states: from Baja Sur to Quintana Roo, Jalisco to Oaxaca.

Renting a car in Mexico is rather straightforward in terms of online reservations and pricing, with the rates often surprisingly affordable for smaller models. Automobiles do cost about 40% more in Mexico than they do in the USA though (a total mystery since many of them are made here and shipped north), so you might get a hard sell on the insurance so they can get some more cash out of you. More on that in a minute.

You’ll encounter a few quirks in the process and will need to allow a lot more time for pick-up. There are some factors to be aware of for Mexican car rentals that you don’t run into so much in the USA or Canada.

When you search for a car hire on Kayak, Hotwire, or your usual rental car brand’s site, the process will look familiar. You can find most of the international brands you already know in Mexico, though understand that they’re all franchises–not offices that company actually owns. Then there are some others you probably haven’t heard of, some home-grown chains like Mex Rent a Car.

I’ve rented multiple times from the local offices of Hertz, Avis, and Europcar, with mixed results, but have had mostly good experiences with Alamo, which is part of the Enterprise Rent-a-Car family. Between them and National, they generally serve around 36 cities in Mexico. 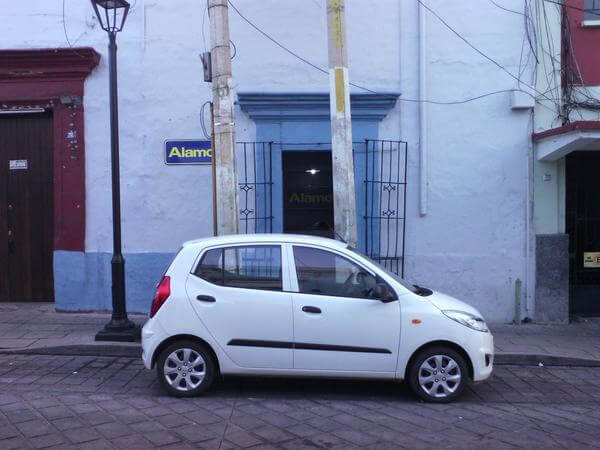 The only one that has totally let me down recently is Budget. I slowed up with my reservation for a four-week rental and they said, “No, we have no cars.” No apology, no help, just advice to “go try Hertz.” I would advise avoiding that one since when I called the 800 number to complain, they basically told me that have zero control over Mexican franchises and there’s nothing they can do. I was stuck with a worse car for more money since I had to take what I could get.

There’s not a whole lot of difference between companies, though sometimes Hertz will throw in the mandated liability insurance you need to drive in Mexico. That can more than make up for a higher per-day rental price. Otherwise, go on deal price and location. Airport rentals can cost a little more than off-site ones, but they don’t levy the “tax the tourists” big fees that you see in the USA and Europe.

A Hefty Deposit for the Rental Car

The Mexican car rental company will often put a hold on your credit card if you don’t take the full insurance coverage, an amount that may be a set price or be a percentage of the car value. So use a credit card with a few thousand dollars open balance on it or your card may be declined. You usually can’t use a debit card or pay cash, so be prepared.

What the company will do is put a hold of this amount on your card and have you sign it. This feels uncomfortable since you’re signing a slip that might have $2,000 or $3,000 on it. Don’t worry though. Unless you wreck the car or don’t return it, they’ll hand that slip you signed back to you at the end and you can rip it up to throw away.

Don’t assume you can be on your way in five minutes just because you’ve reserved your car in advance and given a credit card number. The USA is the land of efficiency, where convenience and speed are considered competitive advantages. Mexico is the opposite, so chill out and assume this process is going to take a while.

After all the paperwork and insurance discussions (see the next section), you and the counter person–or a helper if you have to take a shuttle to a separate facility–will together go over the car panel by panel. You and they will be looking for nicks, scratches, and dents. Minuscule ones that would be ignored in the USA and worked out in the detailing later will be noted on a form. Sometimes that form is paper, sometimes it’s on an iPad. Every tiny bit of damage will go on there.

Pay attention during this part because if anything shows up that’s not there now, you could be charged for it. When in doubt, point it out. To be safe, take your own photos as well with your phone of anything you see. In the USA you’ll be lucky if the person you hand the keys to upon return even walks around the car to look for dents. But when you return the rental car in Mexico, you’ll go through all this again, the agent looking patiently and thoroughly for any new scrapes, scratches, or bumps.

They’ll even look under the car for damage from the (often unmarked) topes—speed bumps. Watch out for those! 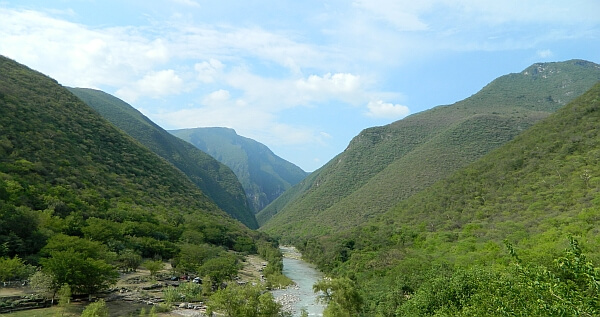 Basic liability insurance is compulsory by law and is therefore included in the total with some car rental quotes. This only covers the other person in an accident, not you. If it’s not included already, you will have to add another $12 to $17 a day for this on top of the rental price unless your own car insurance policy explicitly covers liability in foreign countries. Some do, some don’t. 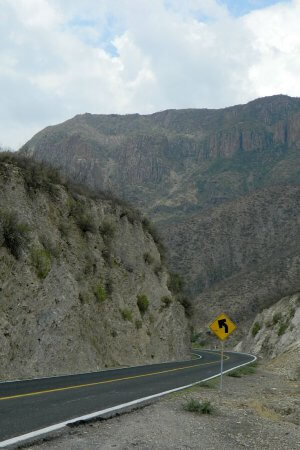 Rates go up from there depending on how much additional coverage you need. If you take the full insurance offering the company is selling, it will usually double the price of the rental—or more. I once reserved a car for $24 per day and the full insurance would have been $40 per day. Lesser options are increased liability, collision damage, personal accident insurance, and theft or vandalism insurance.

It’s best to do your homework and find out a) if your home auto insurance policy covers rental cars in Mexico and b) if your credit card provides insurance for rentals there. In some cases, you can rely on one or both and decline all coverage. In other cases, you can decline everything except liability insurance.

Make sure in advance though as it could be a very costly mistake if you just assume and you’re wrong. You don’t want to be unsure when you’re at a rental car counter and they’re giving you the hard sell (and sometimes bending the truth) where you’re not speaking each others’ language fluently. For each service you decline, you’ll have to initial the contract—which will likely be in Spanish—and assert that you take responsibility for the vehicle.

Other Rules and Guidelines for Renting a Car in Mexico

If you’re under 25, you’re going to have a tough time renting a car in Mexico unless you put up a huge deposit and pay extra or you find a local rental agency that really wants your business. If you’re younger than that, you might want to hire a car and driver for the day instead to go exploring.

Manual cars are much more common than automatic ones and more than once I’ve reserved an automatic and been forced to take a stick shift car. If this is a deal-breaker, stand your ground, but be advised that agencies in Mexico do not have nearly as much inventory as the ones in the rest of North America and you can’t assume they’ll be able to just upgrade you.

Here’s what I ended up with in that recent encounter when Budget Car Rental didn’t honor my full-sized car reservation and I had to take what I could get elsewhere: 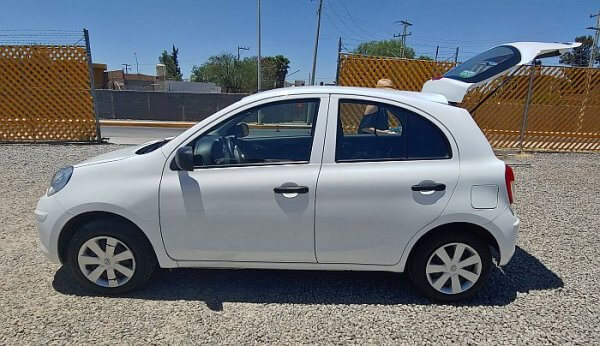 That car had air conditioning and an auxiliary plug to play music from our phones, but otherwise it was like a car from two decades ago: manual everything–including the locks and windows–and power nothing. Thankfully there were only two of us in it the whole time.

This was listed as a “compact” and boy was it. A “mid-size” or intermediate rental car up north does not equal a mid-size in Mexico. It’s more like a compact and their compact is smaller than anything even available stateside. As you can see from this screenshot below, a Dodge Attitude car is considered mid-size/intermediate. A VW Jetta is considered “full size.”

So you probably need to go up two class sizes to find the equivalent size to what you’re used to renting for that class. Unless you upgrade to a higher-end vehicle or pay very close attention to the description, the lowest rate will probably get a very basic car with manual windows, a simple radio, and limited amenities. If you get a van or SUV, you will pay twice as much but get something plusher.

Sometimes you’ll pay a major premium for space though. Look what Hertz is charging per day for a mid-sized SUV from the Leon/Guanajuato airport:

Driving on the Roads of Mexico

I would strongly advise against renting a car in Mexico City or Monterrey, though I have managed to get through Guadalajara and Merida in one piece after renting a car. I did return one in Mexico City once, but I came in on a weekend afternoon when there wasn’t much traffic. Driving during the week there feels like a death wish though.

Outside of the big cities, driving in Mexico won’t feel all that unusual. The highways are in good shape, the signage is good (in Spanish of course), and the police usually aren’t going to bother you unless you’re way over the speed limit. Just be advised that it’s not a good idea to drive at night if you can avoid it. That’s not just a crime issue: you’re also more likely to hit a big animal or a person on a bike with no lights. You’re also less likely to see the speed bumps in the road, which are frequent on smaller roads and in cities.

Drive safely and carefully when you’re in small towns and rural areas. Poorly paid Mexican policeman have a reputation of pulling over people for the slightest perceived infraction. Then the decision is to play nice and maybe hand a bit of money to the cop or stand your ground and deal with the hassle of a ticket that must be paid in person. You can’t just blow that off either: they’ll hold your license at the police station until you come get it and pay. 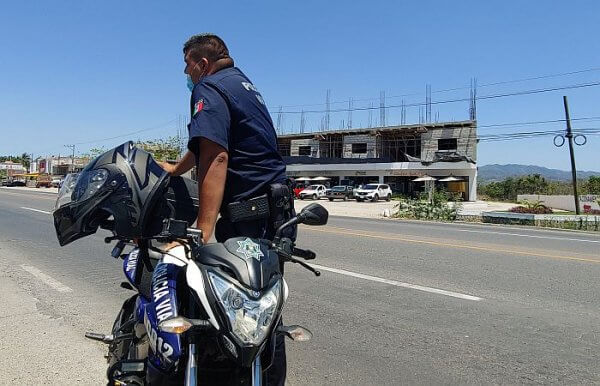 I think this is an overblown fear for most visitors: in my 17 years I’ve only been pulled over twice, both on the same trip. You’ll usually have a great vacation behind the wheel with no issues.

Mexico is a big country and there are some amazing things to see that are not so easy to get to by public transportation. So if you want to see more of the country, rent a car and go exploring.

Check Timeshares to Rent in Mexico for Your Condo Vacation

Where to Stay in Campeche, on the Gulf Coast of Mexico

Four Places Celebrating Day of the Dead Across Mexico
Share it!