Want to see what it’s like inside a luxury villa rental meant for the kind of travelers who fly in by private jet? Wondering why you would go for a Punta Mita Villa rental instead of a hotel suite?

Take a tour of Casa Koko with us, a luxury Mexican oceanfront home from Agave Villas and you’ll see.

Casa Koko was one of the three Punta Mita and Puerto Vallarta luxury villa rentals we profiled in a recent feature story in our online magazine. Follow that link to see the whole rundown and more photos.

All three of them were standouts, each having different characteristics that would make them the right choice for your family get-together, a company retreat, or a fun vacation week with friends. If you work with an expert agency like Agave Villas that specializes in this corner of the market, then they’ll save you a lot of time and hassle picking out the perfect place.

Then when you’ve made your choice, you have a concierge contact who will take care of all the details: what the chef will prepare, what excursions you want to make, transportation, and what you’d like to imbibe on site. 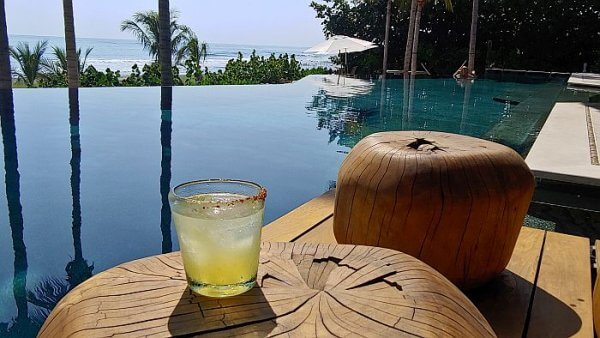 The Punta Mita gated complex north of Puerto Vallarta is by most accounts the most prestigious second home development in Mexico. Filled with open-air Mexican-style mansions from ultra-wealthy owners, it takes up most of the large Punta de Mita Peninsula at the end of Bandaras Bay.

Many of those luxury villas are the third, fourth, or fifth home of some Silicon Valley founder, Texas oil mogul, Toronto real estate developer, or Hollywood movie producer. People forget that there are plenty of Mexicans who are rolling in cash as well, however. So there are owners (and guests at the Four Seasons and St. Regis resorts) who are from both sides of the border. Casa Koko is Mexican-owned and it shows, with an organic style and sense of place that is modern Mexico at its finest.

Besides owning the area’s biggest tour company, the owner is an architect. On top of that, his daughter Koko is an interior designer. The combination really paid dividends with this house. There’s a clear vision in place for every wall of every room, for every meandering stream and fountain, and for the view available from each dining or lounging spot. The spaces are filled with beautiful furniture, including custom-made hardwood beds, as well as carefully chosen art objects and coffee table books. 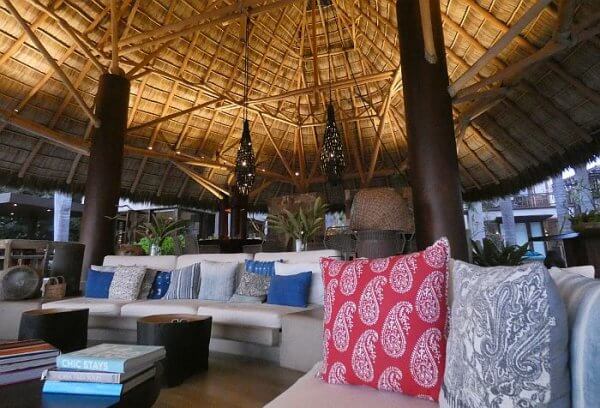 Hammocks are draped in just the right areas and even when Casa Koko is filled to its capacity of 26 people, everyone will still find a lounging spot to call their own. Yes, it does sleep that many, thanks to a couple of rooms with bunk beds for the kids, and the staff can prepare meals for that many at a time thanks to the large gourmet kitchen and a villa chef with a dedicated team.

The most difficult thing for me when writing about this villa was choosing which photos to use in the article. I took more than 200, in addition to the video, because there was something beautiful to look at no matter where I pointed my camera. So I’ve thrown a few other shots of Casa Koko in here so you can get more angles of this sprawling luxury vacation home in Punta Mita. 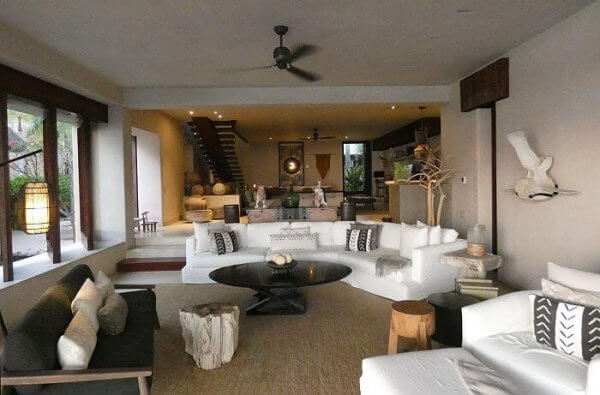 See the video at the top though for an eight-minute tour of the property, then head to the Agave Villas site for rental information.

Keep in mind that what you gain from renting within the gates of Punta Mita goes beyond the villa itself. With most of the high-end villa rentals in this area, you’ll have access to several gorgeous beach clubs, access to the two Jack Nicklaus-designed golf courses that are only available to residents and guests, and you can play at the tennis center. You won’t have to use the Punta Mita fitness center though: Casa Koko has its own private gym with cardio machines, weights, and a Peleton bike.