Mineral de Pozos is one of the original “Magic Towns” of Mexico, one really deserving the title. The historic center has had a few booms and busts over the centuries and it is surrounded by abandoned mining communities that are now ghost towns. 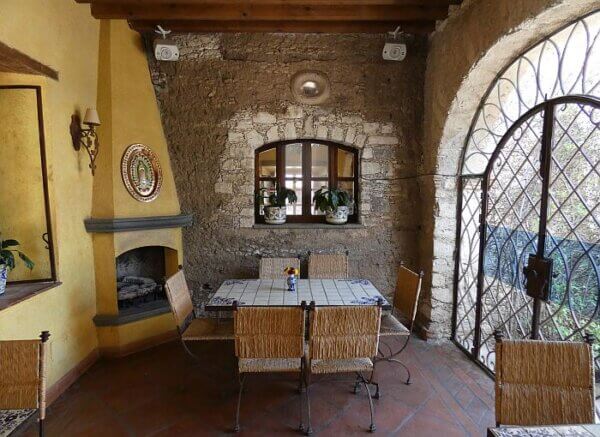 Some of the ruins in Central Mexico date back to the late 1500s, when the Jesuits set up a mission, hacienda, and mining operation at Hacienda Santa Brigida de Morin. Remaining are the three conical “ovens” that have become Mineral de Pozo’s most famous image.

You can tour that site, which is joined by a crumbling church, the large hacienda house, mining equipment, and the “Magical Arches” for ventilation that are still in great shape. That’s just one stop in an area filled with mining ghost towns though. So while you can visit on a day trip tour from San Miguel de Allende, you’ll get a much richer experience by spending a night or two here and taking it slow.

While none of the hotels in the area are luxurious enough to warrant a full review in Luxury Latin America’s online magazine, we stayed at two of the best while exploring this region and toured two more to see what guests can expect. Here are the best hotels in Mineral de Pozos, Guanajuato state. 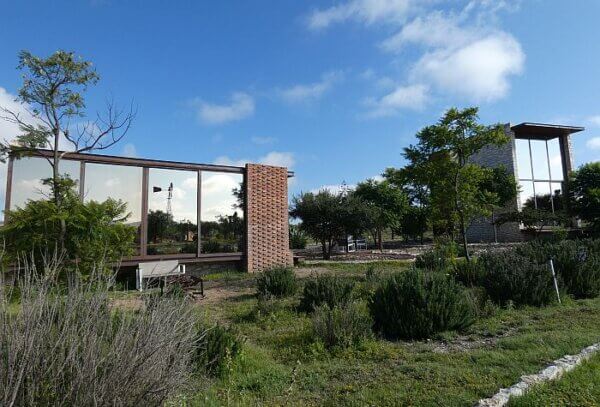 This quirky lodging project is more of an experience than a hotel, with just three units on the grounds of what was once a small mining area. The original hacienda home is now a full guest suite offering a separate living room and kitchen area, plus an outdoor lounging area by a reflecting pool.

The second unit is a tall loft with kitchen and living room downstairs, mirrored glass in the front reflecting the sky and a windmill. The third is a horizontal mini house with two queen beds, a kitchenette, and sitting areas inside and out. These two face another reflecting pool and are surrounded by gravel paths and desert plants. Also on the grounds is a stone labyrinth to walk through and meditate.

There’s no restaurant or bar on site, so while the concierge can help with food ordering from local restaurants, this option is best for guests who have their own car. See a full review of Mineral del Cielo here on our sister site Hotel Scoop.

This hotel is a reflection of the city itself. Once an abandoned building only half-standing, it is now the best hotel in the center of Mineral de Pozos and has the best Mexican restaurant that’s open all week. It also has one of the most evocative cantinas I’ve ever stepped into, a full-on celebration of local ranchero culture. 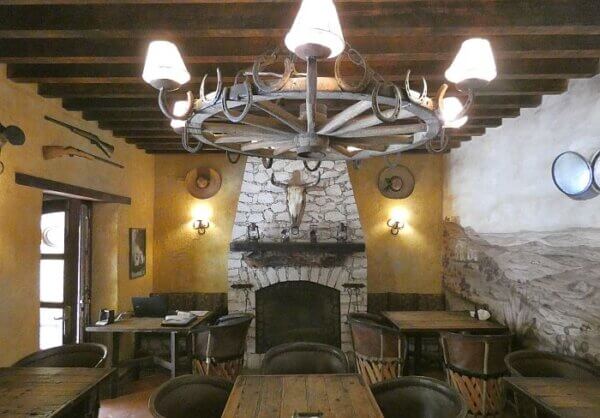 The restaurant offers plenty of options for where you can take your meals, with a large courtyard in the middle, an indoor space by a fireplace, and several outdoor patios. As you walk through the property, enhanced with lovely cacti gardens, you can see some of the original walls, left in their eroded states.

Some of the rooms here are small, so go for one of the suites so your sleeping quarters will live up to the promise of the public areas. All of the rooms are full of personality, however, decorated with local handicrafts. See a detailed review of Posada de las Minas here, along with more photos and a video tour. 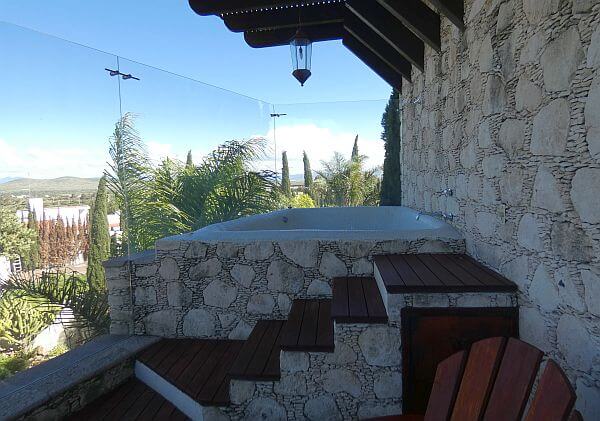 If you want a full-service hotel with lots of amenities, Casa Diamante is your best choice in Mineral de Pozos. It has a lovely swimming pool, well-kept lawns, a bar, restaurant, and spa. It’s no ordinary spa either: the craft beer brewery Vopper is located here, so the “beer spa” has two big tubs where you can soak in suds while drinking one of their beers.

The playful nature extends to the rooms as well, which vary quite a bit and have plenty of personality. There are a few that are downright pampering, one suite having an outdoor tub on the balcony with a view of the countryside. Arcangel suite feels as large as a city apartment and would be a great choice for a romantic weekend. (It has a huge walk-in closet if you packed a lot!) There are 14 rooms and suites now, with two more on the way. Amenities are plentiful, including two Vopper beers in the room.

This hotel is a bit off the beaten path, but is still within walking distance of the center (with good shoes) and is close to the area’s mezcal distillery Cuanax. As with most of the hotels here, you can’t expect much in the way of English proficiency. For that, see the next option. Oddly, this hotel doesn’t appear on any of the hotel booking platforms, so you’ll have to navigate their Spanish-only website here. 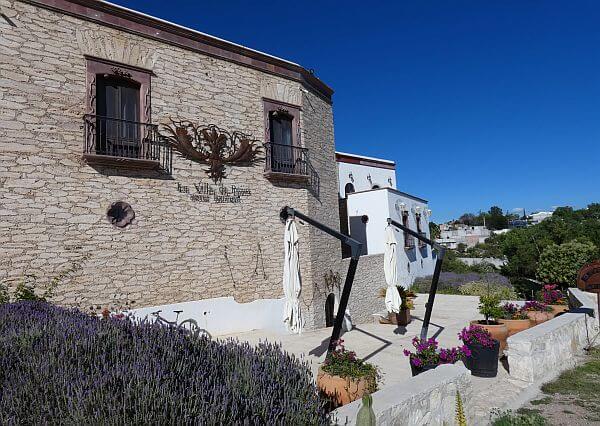 This lovely inn located on the main street of the historic center was founded by an American woman who is often on-site, so you’ll have an easier time making reservations or local requests in English here than elsewhere. The building looks gorgeous from the outside, with its stone walls, vines, and blooming flowers. The inside is just as striking, with exposed stone walls, wood beams, quality handicrafts, and even a dance floor.

The ground-floor restaurant here gets good reviews and is a romantic place at night with its stone arches and candlelight. There’s a cozy pub next to it that would be a great place to spend a cool evening with the fireplace going. Staffers can arrange tours to the abandoned mining camps, the lavender farm, or other attractions and you could get by without a car at this property if taking advantage of those.

There are eight comfortable rooms and suites with good bedding, robes, and fireplaces. The hands-on owners try to keep guests happy. We only stumbled upon this place by accident though as they’re nearly invisible online, with no working website or booking site options that actually worked. Your best bet is probably to see what’s on Tripadvisor and then call 52 (442) 688-4258.

For more, see this article on what it’s like to stay in Mineral de Pozos. For more information on Guanajuato state, follow that link to the tourism board website.

Sample Mexican Wine at the Catando Festival in Guanajuato City
Share it!